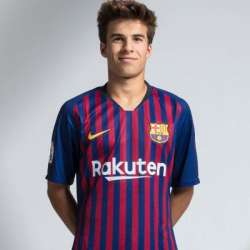 Spanish footballer Ricard Puig Martí, famously known as just Riqui Puig, currently plays for the FC Barcelona B team. He also made few appearances for the senior Barcelona team playing besides football legends like Lionel Messi and Luis Suarez. Puig mainly plays as the central midfielder and contributes significantly to the overall game building. Besides, he has earned praise from national and international media for his excellent ball control and dribbling skills.

Riqui Puig Biography, Net Worth, and Many More

A product of La Masia football academy, he started his football journey in the Catalan club’s jersey from a very early age. And over the years, he improved his game making qualities and became one of the dependable playmakers in the Barcelona junior teams. Besides his club success, he is also known as one of the brightest football prospects of Spanish football. However, he is yet to receive any call from his national team.

He started practicing football in his native club UFB Jàbac Terrassa in his early childhood days. And in 2013, he took his transfer to one of the best football academies in the world, La Masia. He immediately caught the attention of Barcelona’s coaching academy right after his move. Shortly after, Puig started progressing through the La Masia youth system. During that time, he also started displaying impeccable skills and marvelous ball control.

He made his senior debut in Barcelona for their reserve team on 24th February 2018. Puig played this Segunda División championship match against Gimnàstic de Tarragona as a second-half substitute of Marcus McGuane that day. He helped the B team to finish the match in a 1-1 draw. Shortly after, he signed a three-year contract extension with Barcelona on 11th June 2018. He then started participating in the Segunda División B as a member of the Barcelona B team.

Puig made his debut in the Barcelona senior team on 5th December 2018, playing beside the greatest footballers like Lionel Messi, Luis Suarez, and Ivan Rakitic. He came as a substitute for Oriol Busquets in that Copa del Rey match against Cultural Leonesa. Puig helped the side to finish the match in a 4-1 victory. Shortly after, he made his first start in a match against SD Huesca on 13th April 2019. He scored his first senior goal for the Barcelona B team against AE Prat on 14th September 2019.

Born on 13th August 1999, he is the first child of his parents. He grew up in the Matadepera municipality of Spain before moving to Barcelona for his football career. His father, Carles Puig, was also a professional footballer. Carles spent his entire footballing career playing for the Spanish football club, Terrassa FC. He primarily played as a left-back but later deployed in various roles.

According to the current financial reports, the net worth of Riqui Puig is estimated to be around $1 million as of the 2021 football season. He now gets around $50k yearly salary for his participation in the Barcelona senior and reserve team. Besides his regular salary from the Catalan club, he also earns from several of his sponsorship deals.