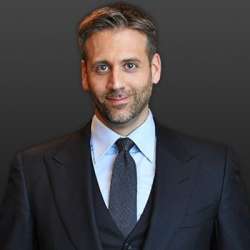 American media personality Max Kellerman predominantly works in the sports industry. Besides having his take on several American sports, he is also a boxing commentator. Alongside Molly Qerim and Stephen Smith, Max now co-hosts one of the most popular sports-oriented talks shows in ESPN, First Take. Besides working in television, he also hosts a radio show on ESPNLA called ‘Max & Marcellus’ along with his co-host Marcellus Wiley.

Max came into prominence while hosting the popular panel talk show called ‘Around the Horn’ in ESPN in 2002. He remained in the show till 2004. After a brief gap following the tragic murder of his brother, he started hosting ‘SportsNation’ with Wiley and Michelle between 2013 and 2016. He also worked as a studio commentator in ‘Friday Night Fights’ with Brian Kenny. Moreover, he also worked as a color commentator for ‘Boxing After Dark’ and ‘HBO World Championship Boxing’.

He started his very own show on professional boxing called ‘Max on Boxing’ on public-access cable television in New York City when he was just a teenager. Besides, he also completed his graduation in history from Columbia University during that time. Shortly after, ESPN hired him as an analyst for a show called ‘Friday Night Fights’. While hosting that show, he met Brian Kenny who later worked as his cohost in radio shows.

He became heavily influenced by a show called ‘Pardon the Interruption’ and launched his very own show called ‘Around the Horn’ on ESPN in November 2002. That show became an instant hit among the American audience. However, ESPN failed to reach an agreement with Max and he left the channel in 2004. Shortly after, he joined Fox Sports Net and started his show called ‘I, Max’. He co-hosted that show with Bill Wolff and Michael Holley.

Following the tragic murder of his brother, Max took a brief gap from television. And, he aired his last episode of ‘I, Max’ on Fox on 18th February 2005. One of the most influential sports media personalities, Tucker Carlson, then invited Max to co-host his show called ‘Tucker’ on MSNBC in that same year. And in the following year, he started co-hosting a show called ‘King of Vegas’ on Spike TV in 2006.

He gave an audition to host a show in the 7 PM slot of ESPN Radio (1050) in New York City on 21st August 2006. Shortly after, he co-hosted a show along with Sid Rosenberg on 28th August 2006 on ESPN Radio. That show received huge appreciation from the audience. Shortly after, he replaced the Colin Cowherd program with his very own show on WEPN on 23rd October 2006. That show regularly aired from 10 AM to noon each day.

Brian Kenny, the famous host of SportsCenter and ESPNEWS, then joined Max as a co-host at the end of 2006. His show then got a slot in the ESPN Xtra on XM Radio since 4th February 2008. However, Kenny left the show by the end of 2008, and Max renamed his radio show ‘The Max Kellerman Show’. He then mutually ended his relationship with the ESPN radio on 9th March 2009.

During the last few years of his radio career, Max joined HBO to co-host the ‘Boxing After Dark’ show along with Lennox Lewis and Fran Charles. He then promoted to the main team of the HBO World Championship Boxing in 2007. Shortly after, he started working as a color commentator along with Harold Lederman and Jim Lampley. He then joined CNN on 12th May 2010, mainly to host a show called ‘CNN American Morning’.

Since December 2010, he started hosting a midday show along with one of the richest NFL players, Marcellus Wiley, on ESPNLA 710. The massive success of his career came when he covered the fight of the century between two of the greatest boxer of all time, Floyd Mayweather and Manny Pacquiao, in May 2015. However, he received huge criticism for his post-match interview with Pac Man.

Shortly after, he joined Molly Qerim and Stephen Smith to co-host the ‘First Take’ show on ESPN on 25th July 2016. HBO then left the boxing industry by ending the contract of Max. Soon after, he signed a multi-year contract with ESPN to cover boxing for the channel. He then started working on the network coverage from his broadcasting desk rather than working as a color commentator from the ringside.

He made his debut movie appearance in the 2006 movie ‘Rocky Balboa’. In that movie, he acted as the broadcast commentator along with Merchant and Lampley during Rocky’s fight with Mason "The Line" Dixon. Max then made his second appearance in the 2015 movie ‘Creed’. Besides movies, he also made cameo appearances in a short film called ‘The Wedding Bout’, and in a show called ‘Real Husbands of Hollywood’.

Born on 6th August 1973, Max is the first child of his father Henry Kellerman, and his mother Linda Kellerman. He grew up in the Greenwich Village area of New York City with his four brothers. Max completed his schooling at Hunter College High School in 1991. And in 1998, he completed his college education at Columbia University. He can fluently speak Yiddish and is very fond of Jewish cultural activities.

Since his childhood, Max is very interested in hip hop. During his teenage years, he founded a hip hop group with Sam Kellerman, his brother. The group called ‘Max and Sam’ then signed a deal with Columbia Records in 1994. Shortly after, they released a music video called ‘Young Man Rumble’ in 1994. However, Sam’s body was found inside his house in Los Angeles on 17th October 2004. Former boxer James Butler was founded guilty of his murder and sentenced to 29-year in jail.

Since his early days as a sports presenter, Max started dating Erin Manning. The couple then married in 1994 after a brief period of their romantic relationship. Now, the couple has three daughters together, Mira Kellerman, Esther Kellerman, and Sam Kellerman. Max named one of his daughters Sam as his brother. The Kellerman family now lives in the Bronx, New York, United States.

According to the current financial reports, the net worth of Max Kellerman is estimated to be around $6 million as of 2020. He currently withdraws around $1 million annual salaries for his association with ESPN. However, he also made a huge income from his previous associations with HBO and Fox. Besides, he also earned quite a good amount of money from his radio shows and boxing commentaries.

Q. Who is Max Kellerman?

Q. How much does Max Kellerman make a year?

Max Kellerman currently makes around $1 million as his annual salary from ESPN. He gets this huge income for hosting a top-rated talk show of that network called ‘First Take’. Previously, he also earned quite a good amount of money for his radio shows.

Q. Who is Max Kellerman married to?

Max Kellerman is married to his longtime-girlfriend Erin Manning. He married Erin in 1994 after a brief stint of a romantic relationship. The couple now has three kids together, Mira Kellerman, Esther Kellerman, and Sam Kellerman.

Q. How old is Max Kellerman?

Born on 6th August 1973, Max Kellerman is now 47 years old as of 2021. He started his career in the sports media industry after finishing his college education at Columbia University. Max currently works on ESPN.