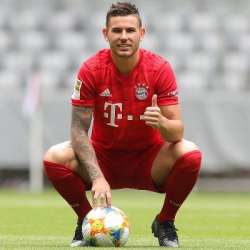 French youngster Lucas Hernandez currently plays as a central defender for German club Bayern Munich besides making regular appearances for the French national football team. Primarily a full-back, he can also operate as a left-back. Although a French-born player, he has spent most of his career in Spain. Lucas graduated from the Atlético Madrid youth academy and then earned his promotion to the reserve side of the club. He has appeared in more than 75 competitive matches for the first team from 2014 to 2018.

He became a regular senior squad-starter for Atlético Madrid in 2014. And recently in 2018, he helped the club to win the prestigious Europa League. He then moved to Bundesliga side Bayern Munich this year. Besides his impressive club career, he also participated for the French squad from U-16 to U-21 youth level between 2012 and 2016. Finally, in 2018, he made his senior international debut with Les Blues. Recently in July 2018, he has helped his nation to secure the 2018 FIFA World Cup in Russia. Without any doubt, Hernandez has earned his place as one of the most promising French players.

Hernandez, although born in France, moved to Spain at the age of just four. He then joined the youth academy system of his hometown club CF Rayo Majadahonda in 2005, at the age of just nine. He has got his basic football training at the club till 2007. Hernandez then joined the youth setup of one of the richest football clubs in Spain, Atlético Madrid, in 2007, at the tender age of just eleven. He went through a rigorous training session upon his arrival at the club. He has played for the youth squads of Atleti from 2007 to 2014.

He has earned his first senior call-up under Diego Simeone to participate in a La Liga match against Villarreal CF on 9th November 2013. But, he remained as an unused substitute on that match. He then made his senior debut for the reserve side of Atlético Madrid in a Segunda División B match against Real Sociedad B on 26th April 2014. Shortly after, he signed his first professional contract with the club on 11th October 2014. From 2014 to 2015, he has made 21 appearances for the Atlético Madrid B team while scoring once.

Hernandez made his first-team debut in the Copa del Rey match against CE L'Hospitalet on 3rd December 2014. Shortly after, he made his La Liga debut for Atlético Madrid in a match against Athletic Bilbao on 21st December 2014. He then signed a new four-year contract extension with the club on 10th August 2015. Upon his renewal of the contract, he has permanently earned his position in the first-team. Hernandez then made his UEFA Champions League debut in the ‘Round-of-16’ match against PSV Eindhoven on 15th March 2016.

Hernandez made his international debut for the French under-16 squad in a friendly match against Italy at Coverciano on 6th March 2012. He then played 2 matches for the French U-18 side in 2018. He has appeared for the U-19 side in 13 matches during the 2014-15 season. Then in 2015, he secured his place in the U-20 squad and played 3 matches for them. Finally, in 2016, he has earned his promotion to the U-21 side and has played 21 matches for the side since then.

Hernandez has earned his first senior international call-up under manager Didier Deschamps in March 2018. He then made his debut in a friendly match against Columbia in Paris on 23rd March 2018. Hernandez has earned his call-up in the 23-man French team on 17th May 2018, to participate in the 2018 FIFA World Cup. Shortly after, he made his World Cup debut in the ‘group stage’ match against Australia on 16th June 2018. He then helped his nation to secure the FIFA World Cup trophy while defeating Croatia in the final on 15th July 2015.

Born in Marseille, France, Lucas Hernandez is of mixed descent. Although a French citizen, he grew up mostly in Spain. His father, Jean-François Hernandez, is of Spanish descent. And his mother, Py Laurence, is of French descent. Interestingly, Jean-François was also a professional footballer and has played as a center back for teams like Marseille and Atlético Madrid. Lucas Hernandez’s brother, Theo Hernandez, is also a professional footballer and currently plays for Real Sociedad.

Lucas is currently married to his long-time girlfriend Amelia Ossa Llorente. Tragically, the Spanish police department arrested Lucas on 3rd February 2017, for assaulting his girlfriend. The couple summoned to appear in the court and has received a restraining order along with 31 days of community service.

The current net worth of Lucas Hernandez is estimated to be around €2 million as of 2019. His market value now stands at €40 million as of the ongoing football season of 2019-20. He now gets nearly €40,000 weekly wage from his current Bundesliga club Bayern Munich. Besides his professional income, he has made his wealth through several endorsement deals. He is currently associated with Nike and wears their Tiempo Legend VII FG boots.

With Atlético Madrid, Hernandez became the UEFA Champions League runner-up in the 2015-16 season. Besides, he also helped the club to win both the UEFA Europa League and UEFA Super Cup in 2018. With France, he has recently won the prestigious FIFA World Cup in 2018.