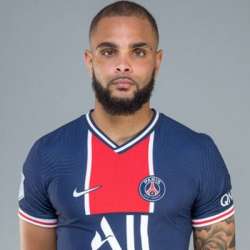 French footballer Layvin Kurzawa currently plays as a left-back for the Ligue 1 club Paris Saint-Germain besides making regular appearances for the France national football team. After spending his childhood days with clubs such as Stade Raphaëlois and Aix-en-Provence, he joined the academy system of AS Monaco in 2007. He then started his professional football journey with the club in 2010. He has appeared in 96 competitive matches while scoring eight times for the club during his time at Monaco between 2010 and 2015.

After his successful sting with Monaco, Kurzawa joined fellow Ligue 1 side Paris Saint-Germain in 2015. He created a solid buzz in French media after winning the treble with PSG in his debut season. In his career till now with the club, he has appeared in more than 50 official matches. Besides his club career, he also represented the French side in several youth sides between 2010 and 2015. He also made his senior international debut with Les Bleus in 2014.

Kurzawa started his footballing journey with the academy system of his hometown club Stade Raphaëlois in 1996, at the age of just four. After having the basic football training for nine seasons at the club, he moved to the Academy of Aix-en-Provence in 2005, at the tender age of just thirteen. He spent two seasons there before finally moving to AS Monaco in 2007. Kurzawa went through a rigorous training session at the club between 2007 and 2010 while sharpening his defensive skills. He then caught the attention of club officials before the start of season 2010-11.

Kurzawa made his professional debut for Monaco in the Coupe de la Ligue third-round match against Lens on 22nd September 2010, at the Stade Louis II. Shortly after, he made his Ligue 1 debut in a match against Lorient on 26th September 2010. After displaying some impressive performances, he became a regular starter at the club in the 2013-14 season. Monaco also achieved the runners-up place in the Ligue 1 after PSG on that season.

Kurzawa then scored his first professional goal in a Ligue 1 game against Guingamp on 14th December 2013. He then scored his first European competitive goal in the UEFA Champions League third qualifying match against Young Boys on 4th August 2015. Kurzawa has made 75 official appearances for AS Monaco and has scored 6 times between 2010 and 2015. Besides, he has also made 30 appearances for the Monaco B team while scoring on five occasions between 2010 and 2013.

The current net worth of Layvin Kurzawa is estimated to be around €5 million as of 2021. His market value now stands at €20 million as of the ongoing football season of 2020-21. However, he has reached his highest market value of €23 million in November 2016. He now gets nearly €75,000 weekly wage from his current Ligue 1 side Paris Saint-Germain. Besides his footballing income, he has also made his wealth through his sponsorship deals. He is currently associated with Nike and wears their Mercurial Vapor XII Elite boots.

With AS Monaco, he won the Ligue 2 title in the 2012-13 season. With Paris Saint-Germain, he won the French Ligue 1 title twice till now. Besides, he has also won both the Coupe de France and Coupe de la Ligue thrice till now. Kurzawa won the Trophée des Champions thrice consecutively with PSG from 2016 to 2018. He has also received his place in the Ligue 1 Team of the Year in the 2013-14 season.