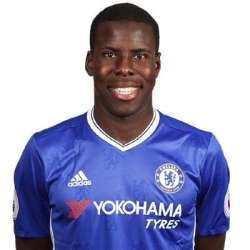 After three successful seasons with Chelsea, Zouma joined fellow Premier League side Stoke City on loan. After playing for them in the 2017-18 season, he joined another fellow EPL club Everton at the start of the 2018-19 season. Besides his club appearances, he has also marked his prominence in the international circuit. He represented all the youth squads of France from U-16 to U-21. Zouma finally made his senior international debut in 2015. Without any doubt, he deserves his place as one of the best young defenders France has ever produced.

Zouma started his footballing journey with the youth academy system of his hometown club Vaulx-en-Velin in 2003, at the age of just nine. After six seasons of training, he joined the Academy of Saint-Étienne in 2009, at a tender age of just fifteen. He went through a rigorous training program at the club for two seasons while sharpening his defensive skills. In that period, he made several appearances for the youth squads of Saint-Étienne. He then caught the attention of club officials ahead of the 2011-12 season.

Zouma signed a five-and-a-half-year contract with one of the Premier League champions, Chelsea, on 31st January 2014. The Blues has reportedly paid €14.6 million transfer fees to get him on their side. He has received the ‘Number 5’ shirt upon his arrival at the club. Shortly after, he has made his debut for Chelsea in a pre-season friendly against Wycombe Wanderers. He then scored his first goal in another friendly against Olimpija on 27th July 2014.

He then helped Chelsea to win the League Cup final against Tottenham Hotspur on 1st March 2015. Zouma scored his first Premier League goal in a match against Arsenal on 19th September 2015. He then scored his first European competitive goal in the UEFA Champions League group stage match against Maccabi Tel Aviv on 24th November 2015. Zouma signed a new six-year contract with Chelsea on 21st July 2017 with an improved payout.

Zouma joined the fellow Premier League side Stoke City on a season-long loan on 21st July 2017. He then made his debut for the club in a Premier League match against Everton on 12th August 2017. Shortly after, he scored his first goal for Stoke in a match against Brighton & Hove Albion on 20th November 2017. He has played 37 matches for the club in the 2017-18 season while scoring once. Zouma, at the beginning of the 2018-19 season, joined another fellow Premier League side, Everton, on a season-long loan on 10th August 2018.

Zouma made his international debut for the French U-16 team in 2010 and has played 6 matches for the squad. He then has earned his promotion to the U-17 side in that same year. He represented the French squad at both the UEFA European Under-17 Football Championship and FIFA U-17 World Cup in 2011. After playing a single match for the U-19 side, he made his debut for the French U-20 side in 2013. The same year, he helped the squad to win the FIFA U-20 World Cup 2013.

He has earned his first senior call-up on 19th March 2015, to play friendly matches as the defensive partner of Raphaël Varane. Souma then made his international debut in a friendly against Denmark on 29th March 2015. He has then made his competitive international debut in a FIFA World Cup qualifying match against the Netherlands on 28th August 2017.

Born in Lyon, France, Zouma is of Central African descent through both of his parent’s sides. His father, Guy Zouma, immigrated to France from the Central African Republic along with his full family. Interestingly, Kurt’s brother, Lionel Zouma is also a professional footballer and currently plays for the French club Bourg-en Bresse. Kurt is currently married to Sandra Zouma. The couple now has two kids together.

The current net worth of Kurt Zouma is estimated to be around €4 million as of the ongoing football season of 2019-20. His market value now stands at €15 million as of the end of 2019. However, he has reached his highest market value of €17 million in February 2016. He now gets nearly €60,000 weekly wage from his current Premier League side Chelsea. Besides his professional footballing income, he has also made his wealth through several of his personal sponsorship deals. He is currently associated with Nike and now wears their Hypervenom Phantom III boots.

With Saint-Étienne, he won the Coupe de la Ligue in the 2012–13 season. Then with Chelsea, he won the Premier League twice and the Football League Cup once. With French U-20 Squad, he won the FIFA U-20 World Cup in 2013. Besides, Zouma has also received the Chelsea Young Player of the Year title for his performance in the 2014–15 season.