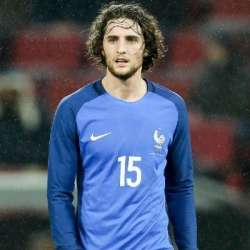 French youngster Adrien Rabiot currently plays as a central midfielder for the Italian Serie A club Juventus besides making regular appearances for the France national football team. He started his football journey with his native side Créteil. Eventually, he joined PSG academy and has earned his promotion to the first squad in 2012. Since then, he has spent his career with the club and has won several accolades with the squad.

Rabiot, in his six seasons of senior till now, has won several trophies with PSG. He won 16 major trophies for the club till now. Besides, he also helped the club to secure the French treble in the 2015-16 season. Rabiot has played more than 140 matches for PSG till now while scoring twelve times. Besides club football, he also marked his prominence in the international circuit. He has participated in 53 matches for the French youth squads. Then in 2016, he made his senior professional debut with Les Blues.

Rabiot started his footballing journey with the youth academy of his native side Créteil-Lusitanos in 2001, at the age of just six. After three seasons, he moved to Alfortville and spent a season there. He then rejoined Créteil and spent another four seasons at the academy. Rabiot joined the youth side of Premier League champion Manchester United for few months in 2008. After that brief stint, he joined the French semi-professional side Pau FC in 2008. Then next season, he moved to Pôle Espoirs de Castelmaurou. Finally, in 2010, he joined the youth academy of Paris Saint-Germain.

Rabiot went through a rigorous training program for two seasons at the Camp des Loges from 2010 to 2012. He then signed his first professional three-year contract with PSG on 2nd July 2012. One of the greatest football managers, Carlo Ancelotti, promoted him to the first team ahead of the 2012-13 football season. Shortly after, he made his senior debut for the club against Barcelona on 8th August 2012. He then made his Ligue 1 debut against Bordeaux on 26th August 2012.

Rabiot made his UEFA Champions League debut in a ‘group stage’ match against Dinamo Zagreb on 6th November 2012. He joined fellow Ligue 1 side, Toulouse, on a season-long loan deal in January 2013. Shortly after, he scored his first senior professional goal for Toulouse against Brest on 9th March 2013. He rejoined PSG in 2014 and helped the side to secure the domestic league twice consecutively. Rabiot scored his first European competitive goal for PSG in a UEFA Champions League ‘group stage’ match against Malmö on 25th November 2015. Shortly after, he made his Coupe de la Ligue debut against Lille on 23rd April 2016.

Rabiot made his international debut for the French U-16 team in 2010. He then made his consecutive debuts for U-17 and U-18 teams between 2011 and 2012. He made his U-19 debut in 2012 and has played 20 matches for the side while scoring four times. Finally, on 13th August 2013, he made his debut for the French U-21 squad in a friendly match against Germany in Freiburg. He has then earned his place in the French senior squad to participate in the 2016 UEFA Euro but remained as an unused substitute.

Rabiot finally made his senior international debut in a friendly match against Ivory Coast on 15th November 2016. Didier Deschamps then named him in the reserve French squad on 17th May 2018, to participate in the 2018 FIFA World Cup in Russia. He then made a controversial statement and refused to participate in the training program for the reserve side. He emailed Deschamps that he would not "be able to follow the training program". The media created a buzz on that and he eventually lost his position from the reserve side.

Born in Val-de-Marne, France, Adrien Rabiot is of pure French descent. He grew up in the Saint-Maurice neighborhood under the guidance of his father, Michel Rabiot, and his mother, Veronique Rabiot. Interestingly, his mother Veronique is the current agent of Adrien.

The current net worth of Adrien Rabiot is estimated to be around €9 million as of 2021. His market value now stands at €50 million as of the ongoing football season of 2020-21. He now gets nearly €60,000 weekly wage from his current Serie A side Juventus. Besides his huge income from football, he also made his wealth through several of his personal endorsements. Rabiot is now associated with sports manufacturing company Adidas and wears their Predator 18.1 soccer cleats.

With Paris Saint-Germain, Rabiot has achieved the French Ligue 1 title five times from 2013 to 2021. He also achieved Coupe de France and Trophée des Champions four times each with the club. Besides, he also helped PSG to win the prestigious Coupe de la Ligue five times consecutively from 2014 to 2018. He has also earned his place in the UEFA European Under-19 Championship ‘Team of the Tournament’ in 2013.