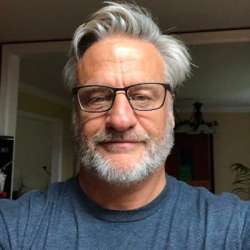 American sports journalist Pat Forde currently works for the Sports Illustrated magazine as their national columnist. He started his career with The Courier-Journal in Louisville, Kentucky, before moving to Yahoo Sports and ESPN. For the last three decades, he proved his worth as a renowned journalist covering various aspects of college sports. Besides, he also now became an important voice in the American sports industry.

He made his mark in the sports media industry with his stellar coverage of the nationwide horse racing event as well as the Olympic Games. However, he also worked as an investigative journalist and nominated for the prestigious Pulitzer Prize. And since that time, he has achieved his place as one of the most respected and renowned journalists covering various sports aspect of the United States.

Associated Press Sports Editors Association honored his work for extensively covering college sports and topics related to it. His notable works also published in the Best American Sportswriting anthology. Forde also worked as the national columnist and feature editor of Yahoo sports. He also previously worked as an analyst for the Big Ten Network. And now, he mainly writes his signature columns called Yard Dash and Forde Minutes in Sports Illustrated.

He started his career as a journalist while working for the Louisiana-based The Courier-Journal in 1987. Since his debut article, he started to make a good buzz in the sports industry. And within a short period of time, he won numerous awards for his investigative and in-depth features. For the first few years, he worked as the beat reporter of The Courier-Journal. And then, he continued to write columns for 12 straight years.

During his time with The Courier-Journal, he wrote investigative columns about academic scandals. He exposed the notorious scandals of the University of Louisville at their American football and basketball programs. That brave writing has earned him a nomination for the prestigious Pulitzer Prize in 1990. Besides, he also received several awards from the Associated Press Sports Editors.

Since his time at The Courier-Journal, he started associating with several big sports media houses such as ESPN and Yahoo. He started writing freelance columns besides working as an investigative journalist and column writer. And in 2004, he left his job at The Courier-Journal. Right after that resignation, he started working as a full-time freelancer for ESPN that he continued for about seven years.

Besides writing feature stories and columns for ESPN, he co-authored a book named ‘The Courier-Journal’ with Rick Pitino in 2008. Rick was working as the basketball coach at the University of Louisville at that time. Forde then caught the attention of global media with his ‘Forde Yard Dash’ column during the NCAA football season. He also started writing a column called ‘Forde Minutes’ during the NCAA basketball season.

During his time as a freelance columnist for ESPN, Forde also worked as a host as well as a panelist for many television and radio shows of ESPN. And by 2010, he became one of the most important sports media personalities in the United States. Shortly after, he also made his mark as the core sports journalism field in college baseball and American football games. He also made his name at that time as a very vocal journalist.

His contract with ESPN expired on 1st November 2011 after working for them for seven long years. However, he opted not to extend his contract and joined Yahoo Sports instead. During his career with Yahoo, he continued his famous columns ‘Forde Minutes’ and ‘Forde Yard Dash’. He recently joined Sports Illustrated on 29th October 2019 as a senior sportswriter covering mainly popular college sports.

Born in Colorado, Forde spent his childhood in Colorado Springs, United States. After a brief relationship with her long-time girlfriend Tricia Forde, the couple then got married. Right after they tied their knots, the couple moved to Louisville, a city in Kentucky. They now have three children together, Mitchell Forde, Clayton Forde, Brooke Forde.

Forde completed his schooling at his native Air Academy High School in Colorado Springs. He played American football during his sophomore and junior years under then-coach Gary Barnett. After completing his schooling, he joined the University of Missouri in Columbia where he studied journalism as his main subject. He completed his graduation from the Missouri School of Journalism in 1987.

According to the recent financial reports, the current net worth of Pat Forde is estimated to be around $1 million as of 2020. He currently draws around $100 annual salary for his association with the Sports Illustrated magazine since October 2019. He currently lives in Louisiana with his wife and three children. Besides his salary, he also earns a pretty good amount of money from freelance writing and public speeches.

Q. Who is Pat Forde?

Pat Forde is a Pulitzer Prize-nominated American sports journalist and columnist currently working for Sports Illustrated since 2019. Besides, he also previously worked with ESPN, Yahoo Sports, and The Courier-Journal. He is best known for two of his columns called Forde Yard Dash and Forde Minutes.

Pat Forde is currently working for an American sports magazine, Sports Illustrated. He previously worked for both ESPN and Yahoo Sports. But, he started his career with The Courier-Journal while working as an investigative journalist.

Q. Where did Pat Forde go to college?

After finishing his schooling at Air Academy High School in Colorado Springs, Pat Forde took admission at the University of Missouri in Columbia. He then completed his graduation in journalism from the Missouri School of Journalism in 1987.

Q. Who is Pat Forde married to?

Pat Forde is married to Tricia Forde. After their brief relationship period, the couple then tied their knots in a private ceremony. The couple now has three children together, Mitchell Forde, Clayton Forde, Brooke Forde.