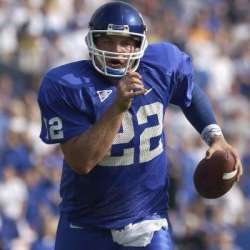 Former quarterback of American Football Jared Raymond Lorenzen aka Jared Lorenzen is one of the heaviest guys ever to participate in the NFL. Besides playing sports actively, he also worked as an administrator of American football. He had quite a successful career during his college days at Kentucky. Shortly after, he joined the National Football League franchise New York Giants and spent four seasons with them.

During his heydays, Jared mainly served as the backup quarterback in NFL. However, he became a part of the New York Giants team that won the Super Bowl in 2008. After spending four seasons, he took his transfer to the Indianapolis Colts. Besides the National League, he also participated in the Continental Indoor Football League and the Ultimate Indoor Football League.

Besides his career as an active player, Jared Lorenzen also worked as a commissioner of the Ultimate Indoor Football League in 2011. He once touched his weight of around 500lbs. However, he initiated the ‘Jared Lorenzen Project’ and worked hard to reduce his weight. His final weight was around 285lbs (around 129 KG). Sadly, Jared Lorenzen died on 3rd July 2019 after suffering from cardiovascular disease.

After grabbing a football scholarship, Jared took his admission to the University of Kentucky as a freshman. Shortly after, the head coach of the Wildcats, Hal Mumme, spotted him and named him as the starting quarterback of the team. Jared earned his place while surpassing the team’s returning quarterback Dusty Bonner. Shortly after, Bonner opted for his transfer for not having his place in the starting squad.

After Guy Morriss took charge of the team, Jared led his team to a successful season in 2002 with a 7-8 record. However, Morriss took his transfer to Baylor University as their head coach and Rich Brooks took his place. Under Brooks, Jared started playing as a receiver and his fellow teammate Shane Boyd opted for the role of a quarterback. He also set the school record for passing touchdowns and passing yards during that time.

Jared remained as an undrafted player during the 2004 NFL draft despite his amazing records. However, New York Giants signed him as an undrafted free agent that same year. After joining the Giants, Jared became the second backup quarterback of the team. One of the best quarterbacks in the NFL, Eli Manning, was the first choice and Tim Hasselbeck was then serving as his backup.

After having a few chances to participate in the main game, Jared led his team to win the 2006 preseason game against Baltimore Ravens. Shortly after, he made his debut in the NFL on 30th December 2006 in Giants uniform. He then made his second appearance in the wild card game against Philadelphia Eagles on 7th January 2007. Jared then made his first regular-season appearance against Dallas Cowboys on 9th September 2007.

He first replaced Eli Manning after he suffered an injury during the fourth quarter of that game. However, he then mainly served as the backup quarterback of Manning for the rest of the season. In that same season, Giants won the Super Bowl XLII after defeating the marvelous squad of New England Patriots. Jared won his first and only championship ring during that season. However, Giants released him on 23rd June 2008.

Jared Lorenzen career with other teams

After his release from Giants, Jared joined Indianapolis Colts on 24th July 2008. He became a squad member during the preseason. However, he failed to become part of the 53-man main roster of the team for the regular season. He then took his transfer to the AF2 league and signed for the Kentucky Horsemen on 10th February 2009. But in October that year, the team went bankrupt and completely dissolved.

Jared then took a brief pause from playing and joined the Ultimate Indoor Football League franchise Northern Kentucky River Monsters as their general manager in 2011. Shortly after, he resigned as the manager and joined the same team as the starting quarterback. During that same season, he won the MVP award of the Ultimate Indoor Football League. After spending two seasons, he again took his transfer.

Jared joined the Continental Indoor Football League franchise Owensboro Rage in 2013. In that same season, he again opted for his transfer and joined another Continental Indoor Football League franchise River Monsters on 17th December 2013. However, he tore his tibia just a week after joining the team. That fatal injury finally ended his professional football career.

After taking a pause from professional football in 2010, Jared started his journey as a coach. He first joined Highlands High School in Kentucky as their quarterback coach on 23rd March 2010. Interestingly enough, he spent his high school days at that same school. He then again joined UIFL and resumed his professional football career.

The Ultimate Indoor Football League named him as their commissioner after the 2011 season. Besides jobs related to American football, Jared also tried his hands on a couple of other things as well. He became the guest host of the Kentucky Sports Radio show based in Lexington. He appeared on the radio show throughout the UK football season. Jared also started his own t-shirt company, ThrowboyTees, in 2015.

After gaining huge weight and becoming massively obese, Jared initiated ‘The Jared Lorenzen Project’ on 28th July 2017. He was weighing over 500lbs at that time. During the first episode of the filming, Jared candidly said he will die in five years if he doesn’t address his weight-related issues. He also collaborated with renowned filmmaker Anthony Holt to document his journey. ESPN also telecasted the weight loss journey of Jared in July 2018.

He battled with his obesity and worked hard. Shortly after, he lost almost 100lbs and started to look fit. Jared also announced that he will air the episodes of his weight loss journey on YouTube. He planned to publish those episodes twice per week, on Mondays and Wednesdays from February 2018. Those episodes of his journey are still one of the most-viewed weight loss journeys on YouTube.

Jared was admitted to the hospital on 29th June 2019 as he was not feeling well for a week. He also had an infection at that time. On that same day, he was transferred to ICU due to other heart and kidney-related issues besides his infection. After spending around a week in ICU, he took his last breath on 3rd July 2019 in his hometown Lexington in Kentucky, United States.

The primary cause of his death was cardiovascular disease, although he was also suffering from kidney-related issues at that time. Kentucky Sports Radio host Matt Jones first announced the tragic death of Jared and his family also issued a statement. Jared was just 38 at the time of his death.

Because of his massive weight and left-handed image, his fans named him ‘Hefty Lefty’. However, he also has some very cute nicknames such as BBQ that translate ‘Big Beautiful Quarterback’, and ‘Quarter (got) back’. His fans also nicknamed him ‘The Pillsbury Throwboy’, ‘The Abominable Throwman’, ‘J-Load’, ‘The Round Mound of Touchdown’, ‘He Ate Me’, and ‘Battleship Lorenzen’.

Jared was always a big guy since his birth. He weighed around 13.3 pounds at birth that is quite unbelievable. Due to his huge bodyweight and size, no one would dare to bully him during his high school days. He topped his weight of nearly 571lbs in 2016. However, he then took the challenge to work on his obesity and reduced his weight by around 300lbs in two years. He was 285lbs at the time of his death.

Hefty Lefty aka Jared was born on 14th February 1981 in Kentucky. He spent his childhood days with his father Joe and mother Janet in Covington. He has done his schooling at Highlands High School in Kentucky. During his childhood days, he showed his prominence in not just football but also in baseball and basketball. Basketball was an extremely popular sport in the USA at that time.

Besides football, Jared also played basketball for his school team. He then led his team to appear in the Kentucky Sweet 16. He then showed his prominence in American football and earned 19th place in the national ranking. Besides, he also achieved the Mr. Football Award during his high school days. Due to his talent, he has earned a football scholarship at the University of Kentucky.

His parents, Joe Lorenzen and Janet Lorenzen raised him in the Covington area in Kentucky. Jared started dating Tamara during his high school days. The couple then got married. They also have two children together. Their first child, a daughter named Taylar, was born when Jared was in Kentucky. Their second child, a son named Tayden, was born in 2009. Sadly, the couple got divorced after spending several years together.

At the time of his death in 2019, the net worth of Jared Lorenzen was estimated to be around $2.7 Million. However, it was way more during his heydays in professional football. It is estimated that he was drawing around $440,160 salary in 2007.

One of the heaviest players in the NFL, Jared Lorenzen, has 28 passing yards and a 58.3 passer rating in his National Football League career. Besides, he also has several other accolades under his name, such as:

So, here are all the interesting facts about Jared Lorenzen aka Hefty Lefty. We hope you liked this article about the American Football star. Feel free to send us your valuable opinion in the comment box below.

Q. Who is Jared Lorenzen?

Jared Lorenzen is an American Football Player who played mainly for the New York Giants for four seasons besides players like Eli Manning. Besides, he also played for the Indianapolis Colts. He is also known for the ‘Jared Lorenzen Project’ that showcased his weight loss journey.

Q. Where is Jared Lorenzen now?

After winning the hearts of millions of his fans all over the world, Jared Lorenzen took his last breath in 2019 in his native place Kentucky. But, his legacy still lives on and his weight loss journey on YouTube still remains one of the most-viewed videos on YouTube.

Q. How did Jared Lorenzen die?

Jared took his last breath on 3rd July 2019. The main reason for his death was cardiovascular disease, although he was also suffering from kidney-related issues at that time. He was admitted to the hospital on 29th June 2019 for an infection. He spent around a week in ICU before his death.

Q. How big is Jared Lorenzen?