Andrew Luck Biography, Net Worth, Career, Injury, Retirement, and many Other Interesting Facts 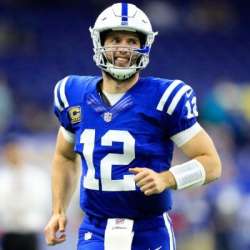 Former American football player Andrew Austen Luck, famously known as just Andrew Luck, played all his seven seasons in the National Football League as a quarterback for the NFL franchise Indianapolis Colts. He started his career while playing college football at Stanford University. During that time, he achieved the Walter Camp Award and Maxwell Award for his amazing performance for the Stanford Cardinal.

While participating in college football, he became an All-American twice. Besides, he also received the Offensive Player of the Year award in the Pac-12 Conference twice consecutively, in 2010 and 2011. He then started playing for the Indianapolis Colts and helped them to win two AFC South division titles consecutively, in 2013 and 2014. Moreover, he also earned his place in the Pro Bowl in both of those seasons.

Luck helped Indianapolis Colts to have the second-largest playoff comeback in the history of the NFL in 2013. However, he suffered an injury in his shoulder during the 2016 NFL season but continued to play. In the following year, he went through surgery on his shoulder. And prior to the 2019 NFL season, he announced his retirement from professional sports while ending his marvelous NFL career.

Luck accepted an athletic scholarship at Stanford University after finishing his high school program. Shortly after, David Shaw and Jim Harbaugh picked him for the Cardinals. During his freshman year in 2009, he became the starting quarterback for his team while replacing the regular starter Tavita Pritchard. He then led the Cardinals to win against all the top 10 Oregon and USC teams. Besides, he also led the team to the 2009 Sun Bowl.

He delivered an unbelievable performance in 2010 and achieved the Pac-10 Offensive Player of the Year award. Besides, he also secured his place in the All-Pac-10 First Team that year. He then led his college team to win the Orange Bowl while securing the Orange Bowl MVP title for himself. Shortly after, he became eligible to appear in the 2011 NFL draft but selected to play for his college instead.

Several biggest sports media houses named him as the No.1 prospect for the NFL draft in 2011. Later that year, he achieved both the Walter Camp Player of the Year Award and the Maxwell Award. He then became a part of the First Team All-America and the runner-up of the Heisman Trophy. Besides, he also achieved the Pac-12 Offensive Player of the Year award that year. Moreover, he also achieved the Academic All-America of the Year award in 2011.

All the sports critics and media houses named him as the top prospect of the 2012 NFL Draft. A huge number of fans of several successful NFL teams forced their franchises to intentionally lose the match to make use of the ‘Suck for Luck’ rule to get Andrew on their side. However, the Indianapolis Colts got him as the first overall pick on 26th April 2012. Shortly after, he signed a four-year contract with them for $22 million on 16th July 2012.

During the pre-season games, Luck made his official NFL debut against St. Louis Rams. Later that year, he made his regular-season debut against Chicago Bears and recorded his first NFL interception. He then made a record as a rookie quarterback after throwing 433 yards against Miami Dolphins in a week-9 game. Pep Hamilton, his quarterback coach at Stanford University, joined the Colts in the following season.

He created a buzz in the sports media industry after achieving his place in the Pro Bowl on 19th January 2014. He replaced one of the best NFL quarterbacks, Russell Wilson, on that game. Moreover, he also became the first quarterback in the 2014 NFL season to reach 4,000 passing yards. He also received the AFC Offensive Player of the Month for November on 4th December 2014. Besides, he also recorded the highest passing touchdowns in the 2014 NFL season.

Indianapolis Colts exercised the fifth-year extension option of Luck’s contract to secure him for the 2016 NFL season on 9th April 2016. And for that, Luck received $16.55 million for that season alone. He then achieved his place in the NFL Top 100 Players in 2016. Shortly after, he signed a new six-year contract extension with the colts on 29th June 2016. The total value of the contract was $140 million with $87 million guaranteed income.

That huge contract instantly made him the highest-paid American football players at that time. He then achieved the AFC Offensive Player of the Week award for his brilliant performance against the New York Jets in the 13th week. He recorded a total of 31 touchdowns and 4,240 yards in the 2016 NFL season. Besides, he also had 63.5 completion percentages in 2016. For that marvelous feat, he achieved his place in the NFL Top 100 Players of 2017.

Luck then took a 616-day gap from professional football due to his repeated injury. He then made his comeback against Cincinnati Bengals on 9th September 2018. In that 2018 NFL season, he recorded a total of 4,593 passing yards with 15 interceptions and 39 touchdowns. And for that performance, Pro Football Writers Association gave him the NFL Comeback Player of the Year Award.

During the 2015 NFL season, Luck suffered a severe injury in his throwing shoulder and missed the fourth and fifth week of the season. He then tore his abdominal muscle and suffered a lacerated kidney on 10th November 2015. And since that time, he was playing with a lingering problem in his right shoulder. After the 2016 NFL season, he went through surgery to solve his shoulder related issues.

He went through shoulder surgery before the start of the 2017 NFL season but missed the entire season for his post-operative recovery. Shortly after, he went to Europe to seek additional medical treatments for his shoulder-related issues on 11th November 2017. Following his return from Europe, he went to a sports rehab center in Los Angeles. His throwing coach, Ballard, then announced that Luck would not need any more surgeries on 7th February 2018.

Luck announced his retirement from professional sports on 24th August 2019 at the age of just 29. He faced several injuries over a period of three years and went through several surgeries. Besides, he also went through several recurrent cycles of post-operative rehabilitation. He cited all these issues as the primary reasons for his retirement in a press conference on 24th August 2019. And still, he is dubbed as one of the greatest players to retire early due to injuries.

Born on 12th September 1989, Andrew is the oldest child of his father Oliver Luck, and mother Kathy Luck. He grew up in Washington with his two sisters and a brother, Mary Ellen, Emily, and Addison. His father, Oliver, is the current commissioner of the XFL. Besides, he also played for the Houston Oilers in NFL and for West Virginia University in college football. Moreover, Oliver also served as the former executive vice president of NCAA.

Due to his father’s travel, Andrew spent most of his time in London and Frankfurt during his childhood days. He attended the Frankfurt International School in Frankfurt and then attended The American School in London. After moving back to the US, he attended Stratford High School. He then completed his bachelor’s degree in architectural design from Stanford University. During that time, he also achieved the Al Masters Award for both his sports and academic excellence.

After dating his long-time girlfriend Nicole Pechanec, Andrew married her on 31st March 2019. The couple then officially announced on 14th June 2019 that they are expecting their first child. Shortly after, their daughter Lucy Luck was born in November 2019. Andrew is now living a happy life with his family in Washington, D.C. In an interview, he once stated that his favorite musician is Bruce Springsteen, and grew up listening to his songs.

According to the current financial reports, the net worth of Andrew Luck is estimated to be around $200 million as of 2020, making him one of the richest athletes in the world. He constantly got around $10 million yearly salaries from Indianapolis Colts during his NFL days. Luck had a $12.8 million signing bonus during his NFL draft. Besides, he also signed a $140 million contract with the Colts with $87 million guaranteed income.

Besides having the most passing yards as a quarterback for consecutive 5 games in the postseason, Luck has several awards in his name. Some of the most notable achievements among those are:

Q. What happened to Andrew Luck?

Q. Why did Andrew Luck retire?

From 2016 to 2019, he suffered a series of shoulder injuries in his throwing shoulder. And for that, he went through several surgeries and post-operative rehabs. Besides the shoulder, he also once tore his abdominal muscles. And due to repeated injuries and surgeries, he announced his retirement in August 2019.

Q. When was Andrew Luck drafted?

He first became eligible for the 2011 NFL draft but opted to play for his college team instead. He then took part in the 2012 NFL draft. NFL franchise Indianapolis Colts drafted him as the first round first overall pick on 26th April 2012. However, he signed his first contract with the Colts on 16th July 2012.

Q. How old is Andrew Luck?

Andrew Luck is 31 years old as of 2021 Born on 12th September 1989, he grew up with his two sisters and a brother. He is the oldest child of his parents, Oliver Luck and Kathy Luck. During his childhood days, he lived in Frankfurt, London, and Stratford before settling in Washington.

Q. How tall is Andrew Luck?

Andrew Luck is 6 feet 4 inches (1.93 meters) tall. He currently weighs around 240lbs (109 kgs). He is quite taller than the average guy in his team. And for that, he had an added mile while throwing in the NFL.