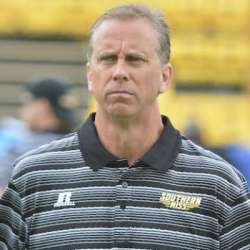 He previously worked as the offensive coordinator for most successful NFL teams like Tampa Bay Buccaneers, Cleveland Browns, and Jacksonville Jaguars.

Todd took admission in the bachelor’s degree in Economics at the Knox College in Illinois. He then started playing for his college team as a quarterback. For his performance in his senior year, he has achieved his place in the first-team small college All-America.

During that time, he also became a member of the famous Beta Theta Pi. After finishing his graduation, he then started studying at the Grand Valley State University to pursue a master’s degree in education leadership.

Shortly after, he took his duty as a coach with defensive assistant Brian Kelly. He then took his transfer to Notre Dame and started working as a graduate assistant in 1991.

Todd then moved to Oklahoma State in 2002 and coached till 2004. And then in 2011, he rejoined the team. During that time, he coached one of the best NFL wide receivers, Justin Blackmon.

After then-coach Ellis Johnson witnessed a tragic 0-12 record, Todd joined the Southern Miss football team as their head coach on 10th December 2012. After three seasons, he moved to the National Football League.

Recently on 17th January 2020, he joined the Georgia Bulldogs football team of the University of Georgia as their quarterback coach as well as their offensive coordinator.

Todd joined the National Football League franchise Jacksonville Jaguars as their wide receiver coach in the 2007 NFL season. He then joined another NFL side Tampa Bay Buccaneers as their offensive coordinator on 24th January 2016.

But his stint with the Buccaneers lasted for just two seasons. He then joined the NFL franchise Cleveland Browns as the offensive coordinator on 1st January 2019.

Born on 5th February 1966, Todd Monken grew up in the Wheaton suburb in Illinois, United States, along with his brother, Ted Monken. Like Todd, Ted is also a professional American football coach and previously served as the head coach of the St. Charles East and West Chicago.

One of Todd’s cousins, Jeff Monken, currently serves as the head coach of the United States Military Academy in college football.

Almost all the members of Todd’s family are connected to the coaching job. His uncle, Mike, also coached for more than 30 years. Todd Monken married his wife Terri Monken after having a brief period of a romantic relationship. The couple now has a son together named Travis Monken.

According to the recent financial reports, the current net worth of Todd Monken is estimated to be around $2 million as of the 2021-22 American football season. He now gets nearly $1.1 million annual salary for his association with the University of Georgia. Besides, he also earns from public appearances and sponsorship deals.

Q. Who is Todd Monken?

Yes, Todd Monken is the cousin of Jeff Monken. Jeff is currently serving as the head coach of the United States Military Academy football team that participates in college football. The whole Monken family is related to the coaching profession.

Q. What kind of offense does Todd Monken run?

Todd Monken mainly implements a pass-first strategy to his teams. The traditional term of that strategy is called the "Air Raid" offense. And for his offense strategies, the teams that he coached achieved some big success in both college football and the National Football League.

Q. What is the personal achievement of Todd Monken?

Todd Monken helped the Southern Mississippi Golden Eagles football team to become the C-USA West Division champion in 2015. And for his performance that season, he received the C-USA Coach of the Year award.