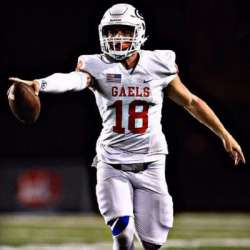 American football quarterback Tathan Martell, famously known as just Tate Martell, currently plays for the National Football League franchise Miami Hurricanes. He came into prominence during his time with Ohio State in college football where he started playing as a quarterback. Several media houses ranked him among the best football prospects and one of the best QBs to participate in the 2017 recruit year.

Several organizations including USA Today, Gatorade, and MaxPreps named him the national player of the year for his amazing performance in college football. He also became the US Army All-American for his brilliant performance. During his time as a starting quarterback, Ohio State became the undefeated national champion for consecutive years. Throughout his college career, he achieved his place among the first-team all-state.

During his time with Pine High, he led the team to a record 15-0 winning run. He made 41 touchdowns with 2,362 passing yards. And for that feat, he achieved the Gatorade Football Player of the Year award. Tate also performed pretty well for Bishop Gorman and led the team to an unmatched 45-0 winning run. He made 113 touchdowns and 7,510 passing yards during that time. He later featured in the Netflix documentary ‘QB1: Beyond the Lights’.

Scout.com ranked him as a five-star recruit for his brilliant performance in his high school career. Besides, he also rated as the second-best dual-threat quarterback. Moreover, he achieved his place among the best players overall. He first committed to the University of Washington at the age of just 14 but later changed his commitment towards Texas A&M University in 2015. But in the following year, he became committed to Ohio State University in May 2016.

He started his true freshman year as a redshirt in 2017. But in the following year, he started as a freshman and achieved his place in the spring camp of Ohio State. However, he failed to achieve his starting role that season and mainly served as the backup of one of the most handsome quarterbacks, Dwayne Haskins, in 2018. Shortly after, he made his debut for the Ohio State in a match against Oregon State.

During that match, he successfully completed 33 yards in three passes out of his four attempts. He then scored his first college touchdown in a match against Rutgers. Tate completed a 47-yard touchdown run and a 51-yard pass to fellow teammate Terry McLaurin during that match. He participated in just six matches during the 2018 season. However, he made 269 passing yards and 128 rushing yards during that season.

Justin Fields, the former starting quarterback of Justin Fields, announced his intention to join the Ohio State team in January 2019. However, Tate previously announced that he would not opt for his transfer if he gets his starting position in a press release on 30th December 2018. But after the intention of Justin became clear, Tate opted for the NCAA transfer portal on 10th January 2019.

NCAA then granted him a transfer on 16th March 2019. And, he instantly became eligible to play for Miami State while taking his transfer from Ohio State. Right after his transfer to Miami Hurricanes, redshirt freshman QB Jarren Williams replace Tate in the starting position as a QB. He then started appearing as a wide receiver. But after few games, he again switched back to his usual quarterback role.

Born on 26th January 1998, Tate spent most of his childhood in the San Diego area of the United States. He became a Pop Warner Little Scholars and started practicing American football at the age of just 7. Since his childhood, he drew the attention of his coaches as he was a throwing quarterback while most of the kids of his age are just running QBs. He then also got the attention of Steve Sarkisian, the head coach of Washington State.

Tate is actually from Southern California. He is the first child of his father Al Martell and his mother Tafi Martell. He also has a sister named Rylee Martell.  She is an Instagram model and created a sensation since 2016. Rylee also played volleyball during her high school days at Bishop Gorman. She is currently signed with the JAG Models agency in New York and Modelwerk in Germany. Tate started dating Kiki Passo, an Instagram model, in July 2019.

According to the recent financial reports, the net worth of Tate Martell is estimated to be around $1 million as of 2020. He gets most of the money for his appearance for the Miami Hurricanes in college football. However, he also makes public appearances. Soon after his NFL draft, his net worth will definitely witness a surge.

Besides delivering amazing performances for Ohio State and then for Miami Hurricanes, there are several amazing awards under his name. Some of the most amazing accolades among those are:

Q. Who is Tate Martell?

Q. Where is Tate Martell now?

Tate currently plays for the American football team of the University of Miami, the Miami Hurricanes. He mainly plays as the starting quarterback. However, he also played few matches as a wide receiver.

Tate Martell is currently dating the Instagram model Kiki Passo since July 2019. Kiki is an Instagram sensation and has more than 1 million active followers. She is known for her bold photos and amazing figure. She was born in Brazil and then moved to the United States.

Q. Who is Tate Martell sister?

Rylee Martell is the sister of Tate Martell. Rylee is an Instagram model with around 100k active followers. She is currently signed with the JAG Models agency in New York. Besides, she is also associated with Modelwerk in Germany.