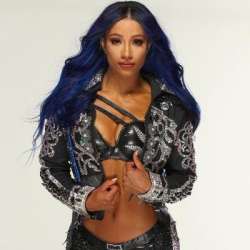 American female wrestler Mercedes Justine Kaestner-Varnado, famously known by her nickname Sasha Banks, now performs in WWE. She mainly appears in the SmackDown segment of the World Wrestling Entertainment. However, she previously appeared in several independent circuits including Chaotic Wrestling. And during that time, she also held the Chaotic Wrestling Women's Championship title.

She started her career with NXT and became the NXT Women's Champion within a brief period. Shortly after, she became a part of the main roster of WWE and achieved the Raw Women's Championship a record four times and the WWE Women's Tag Team Champion once. She first made a buzz in the global wrestling media after appearing in the first-ever Iron Woman match called ‘NXT TakeOver: Respect’ against Bayley in 2015.

PWI (Pro Wrestling Illustrated) magazine named that match between two WWE divas as the match of the year in 2015. In that same year, she achieved the Woman of the Year in the wrestling world. She then appeared in a match called ‘NXT TakeOver: Brooklyn’ which was later received the ‘Match of the Year’ during the NXT Year-End Award. Recently in 2019, she achieved the inaugural Women's Tag Team Championship in WWE with her partner Bayley.

She started training with CW (Chaotic Wrestling) in Massachusetts way back in 2008. After two years of rigorous training, she made her debut as ‘Mercedes KV’ with her tag-team partner ‘Nikki Roxx’ on 1st October 2010. Shortly after, Banks made her singles debut in a match against ‘Danny E’ on 22nd October that month. She has achieved her first in-ring victory with her tag-team partner Nikki on 7th January 2011.

Since her debut in CW, Banks also made simultaneous appearances in several independent wrestling promotions. With her tag-team partner Ivy, she made her debut in NECW (New England Championship Wrestling) on 8th August 2010. After a brief stint with CW, she again made her return to NECW on 4th September 2011. She bagged a grand win in that promotion after defeating Mistress Belmont on 23rd September that year.

Banks kept herself away from independent circuits for almost a year and made her comeback on NECW on 14th July 2012. Besides, she also previously made her debut in NWA (National Wrestling Alliance) with her ring name ‘Miss Mercedes’ on 19th November 2010. She started her feud with one of the greatest female wrestlers, The Great Cheyenne, that same year. Banks appeared in her last match on NWA on 3rd August 2011.

Banks first participated in a tryout camp of WWE in June 2012. She then signed an exclusive contract with them on 18th august 2012. WWE first assigned her to their developmental territory, NXT. During that time, she first adopted her popular nickname ‘Sasha Banks’ and made her debut on 12th December that year. The following year, she took part in the inaugural NXT Women's Championship on 19th June 2013.

Banks first faced Charlotte in a match called ‘NXT Take Over: R Evolution’ on 11th December 2014. She then defeated Charlotte and won her first-ever NXT Women's Championship on 11th February 2015. Shortly after, she successfully defended her title against Becky Lynch in the ‘NXT Take Over: Unstoppable’ match on 20th May 2015. She then made her debut in the first-ever Iron man match in WWE history on 7th October that year.

Banks made her debut in WWE Raw in the WWE Divas division on 13th July 2015. Shortly after, she formed a group called Team B.A.D (Beautiful and Dangerous) with the hottest WWE divas, Tamina and Naomi. She then made her debut in the PPV event during ‘WWE Battleground’ on 19th July 2015. In that same month, WWE retired its Divas Championship and formed a new competition called WWE Women's Championship.

Raw drafted Banks during the 2016 WWE draft on 19th July 2016. Shortly after, she made her debut in Raw against Charlotte on 25th July that year. And with that win, she achieved the WWE Women's Championship. She then again faced Charlotte on 3rd October later that year. With that victory, she achieved the Raw Women's Championship title for the second time in her career.

She faced Charlotte in the first-ever PPV event that features the inaugural episode of the women’s Hell in a Cell match on 30th October 2016. In the following year, she participated in a four-way match during WrestleMania 33 on 2nd April 2017. She then faced Bliss on 20th August that year. And with that amazing victory, she achieved the Raw Women's Championship a record four times in her career.

Banks became a part of the first-ever Women's Royal Rumble match on 28th January 2018. Shortly after, she became a part of the first-ever women's elimination chamber match in a PPV event called ‘Namesake’ on 25th February 2018. She also participated in her first ‘Money in the Bank’ ladder match in the following month. Banks then created a tag team called ‘The Boss n Hug Connection’ with Bayley in July that year.

She won the first-ever WWE Women's Tag Team Championship in an Elimination Chamber match on 17th February 2019. The media started a rumor about her possible departure later that year after she canceled her appearance in the WWE morning talk show called ‘Wendy’ in May 2019. Although she stated that she had to cancel it due to personal reasons, WWE never confirmed any rumor regarding her departure at that time.

SmackDown then drafted her in the 2019 WWE Draft. She made her debut in SmackDown on 8th November 2019. That also featured her cousin, Snoop Dogg. During that same match, SmackDown announced that she will lead the women's team in the upcoming Survivor Series. And on 20th March 2020, she became a part of the SmackDown Women's Championship in WrestleMania 36.

Born on 26th January 1992, Sasha was the only daughter of her father Reo Varnado, and mother Judith Varnado. She grew up with her specially-abled brother in the Fairland area of California. However, she later moved to several places all over the United States while looking for a perfect school for her brother. Her family then started living in the Boston area of Massachusetts. Banks also started her wrestling journey from that place.

Banks are actually of mixed descent with American and European ancestry. She is the first cousin of famous American rapper Snoop Dogg. He also helped Sasha to develop her in-ring personality. Besides, Sasha is also the first cousin of famous music artists, Ray J, Daz Dillinger, and Brandy Norwood. In a recent interview, Banks revealed that she was an avid follower of K-pop music and anime series during her childhood days.

After a brief relationship period, Sasha married WWE costume designer Sarath Ton on 4th August 2016. Sarath is also a retired professional wrestler and performed in WWE with his ring name ‘Kid Mikaze’. He suffered a horrific injury during his match with 'The Vaudevillians'. Sarath went unconscious on stage after receiving a fatal blow in his head.  In a later interview, Sasha revealed that she was a big fan of one of the most entertaining aerial wrestlers in WWE, Eddie Guerrero.

According to the current financial report, the current net worth of Sasha Banks is estimated to be around $3 million as of 2020. She now receives around $250k yearly salary for her association with the SmackDown segment of WWE. Besides, she also previously earned quite a good amount of money from her appearances in several independent wrestling circuits.

Besides being named among the Top 10 women's wrestlers of the year by Sports Illustrated, she achieved several awards till now. Some of the most notable among those are as follows:

Q. Who is Sasha Banks?

The real name of Sasha Banks is Mercedes Justine Kaestner-Varnado. She got her last name Varnado from her parents, Reo and Judith Varnado. Besides adopting her ring name ‘Sasha Banks’, she previously appeared in several independent wrestling circuits as Mercedes.

Q. Who is Sasha Banks dating?

Since her time with NXT, Sasha Banks started dating former American wrestler Sarath Ton. He previously appeared in the wrestling circuit with his ring name ‘Kid Mikaze’. The couple got married on 4th August 2016.

Q. Where is Sasha Banks?

Sasha Banks currently participates in the SmackDown segment of WWE. She now lives in the Boston area of Massachusetts with her husband, Sarath Ton. However, she previously lived in the Fairland area of California with her family during her childhood days.

Q. How old is Sasha Banks?

Sasha Banks is 28 years old as of 2020. She was born on 26th January 1992 in the Fairland area of California, United States. Although she is quite a young diva in WWE, she has already made her name as one of the greatest female wrestlers of all time.

Q. How tall is Sasha Banks?

Sasha Banks is 5 feet 5 inches (1.65 meters) tall. She is a bit less tall than the average female wrestler in WWE. However, she makes up to her height with her marvelous wrestling skills. Besides, she also has quite a brilliant areal ability.