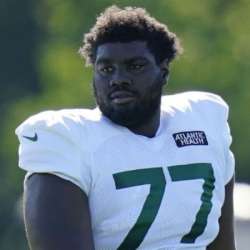 American football player Mekhi Becton currently plays for the National Football League franchise New York Jets as an offensive tackle. He had immense popularity while playing for the American Football team of the University of Louisville, the Louisville Cardinals. And due to that, the NFL franchise New York Jets took him as their first-round selection during the 2020 NFL Draft.

Although he caught the attention of several American Football pundits during his high school stint, he sharpened his skills during his college football. And for that, several most successful NFL teams had their eyes on him even before he opted for the NFL draft. Due to his immense potential, Becton is expected to become one of the best Offensive Tackles in NFL in near future.

Becton completed his high school education from the reputed Highland Springs High School located in Highland Springs, Virginia, United States. Widely regarded as a three-star football prospect, Becton was recognized by several sports pundits. A total of 31 colleges and universities recruited him after he delivered brilliant performances during his school career.

During his freshman year in the 2017 college football season, Becton played a total of 13 games for the Louisville Cardinals. And out of those, he started in 11 games. Pro Football Focus recognized him as the highest-rated freshman in the United States during his first four games of the season. He allowed just 6 pressures in 312 snaps while playing as an offensive tackle in his freshman year.

Because of his spectacular performance, he became the best pass-blocker in the Atlantic Coast Conference. In his second year at college, he started in all the 23 games in the 2018 college football season. Cardinals also named him as the starting tackle in the 2019 college football year. Due to his brilliant performance, he has achieved his place in the first-team All-ACC ahead of the 2020 Draft.

With his height of almost 6 feet 8 inches, Becton had all the physical features that an offensive tackle should have. Besides, he also delivered great performances in his college football career for the Cardinals. And for that, many NFL franchises aimed for him. However, he was selected by the first round 11th overall picked by the National Football League franchise New York Jets during the 2020 NFL Draft.

Born on 18th April 1999, Mekhi is the first child of Jerome Becton and Semone Becton. Mekhi’s father, Jerome, played as a defensive tackle in the Arena Football League as a semi-pro player. However, he now works as a transportation supervisor. Mekhi grew up in Virginia along with his two brothers, Michael Becton and Mason Becton. Mekhi currently has a romantic relationship with his girlfriend, Bionca Dunham.

According to the recent financial reports, the current net worth of Mekhi Becton is estimated to be around $500k as of the 2021-22 American football season. He signed a $7.4 million worth of contract with the Jets for four seasons. He currently gets around $610k yearly salary for the 2021 NFL season from his team. Besides, he also has sponsorship deals with several companies.

Q. Who is Mekhi Becton?

Mekhi Becton is an American football player currently signed with the National Football League franchise New York Jets. However, he first came into prominence while playing for the Highland Springs High School. And after that, he delivered brilliant performances for the University of Louisville.

Although several NFL franchises had their eye on him, Ney Work Jets finally drafted Mekhi Becton as the first round 11th overall selection at the 2020 NFL draft. He completed a 40-yard dash in just 5.10 seconds in his NFL draft. And now, he signed a four-year contract with the Jets with a guaranteed salary of $7.4 million.

Mekhi Becton received 31 recruitments from all over the United States. However, he narrowed that to just five and finally signed for the Louisville Cardinals of the University of Louisville in the National Signing Day on 1st February 2017. The University of Virginia heavily recruited him before he finally joined Louisville.

Q. What number is Mekhi Becton?

Since he joined the National Football League franchise New York Jets in NFL Draft 2020, Mekhi Becton is having the Number 77 shirt. However, he previously wore the No.73 short while playing for the Louisville Cardinals. He had to choose a different number as New York Jets retired the No.73 with respect to Joe Klecko in 2004.