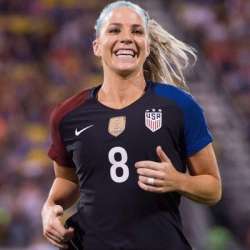 American soccer star Julie Beth Ertz, famously known as just Julie Ertz, currently plays for the National Women's Soccer League franchise Chicago Red Stars. Besides, she also plays as a central midfielder for the United States women's soccer team. She first came into prominence after making her debut for the USA national side in a friendly match against Scotland in 2013. And till 2020, she has made more than 100 appearances for the national side.

Julie started her soccer journey while playing for the Broncos team of Santa Clara University in 2010. She then opted for the NWSL College Draft in 2014 and picked up by the Chicago Red Stars. She quickly became the second-youngest player to participate in the 2015 edition of the FIFA Women's World Cup. Julie then also became a part of the 2019 FIFA Women's World Cup. She has achieved the ‘USA Soccer Female Player of the Year’ twice till now, in 2017 and in 2019.

She attended Santa Clara University as a freshman in 2010. Besides doing her major in communication, she also started playing for the Santa Clara Broncos female soccer team of her college since then. She participated in 20 matches for her college team that year. With her domination performance that season, she received the WCC Freshman of the Year award.

She became a part of the Soccer America All-Freshman First-Team and WCC All-Freshman team in that same season. Besides, she also achieved her place in the All-WCC Second-Team and NSCAA All-West Region Second-Team. Julie then scored 9 goals and assisted 4 more while playing for the Broncos as a sophomore in 2011. And that year, she became the semifinalist of the WCC Hermann Trophy.

During her high school days in 2006, Julie took part in the United States U14 National Identification Camp. She then became a part of the U18 national team training camp at The Home Depot Center in California in 2009. Her first big international success came after her selection in the under-20 youth soccer team of the United States in 2012. She scored her first international goal against Switzerland in the La Manga Tournament in 2012.

Julie then participated in the 2012 FIFA U-20 Women's World Cup and scored 4 goals. And for her amazing performance in that world cup, she received the Bronze Ball. She then also helped her national soccer side to win the CONCACAF Under-20 Women's Championship in 2012. Shortly after, she became a part of the U23 team of the United States in 2013 and represented her country in the Four Nations Tournament.

Chicago Red Stars selected her as the first round third overall pick during the 2014 NWSL College Draft on 17th January 2014. In that same year, she made her debut for Red Stars and scored her first goal for them against the Western New York Flash on 19th April 2014. She delivered a great performance that season and achieved the NWSL Rookie of the Year 2014. In the following year, she missed most of the club season due to her international training camp.

During the 2015 NWSL season, She spent most of her time preparing for the 2015 FIFA Women's World Cup in Canada. However, she has achieved her place in the NWSL Best XI that season. Julie then took part in 12 matches for the Red Stars before joining the training camp for the 2016 Summer Olympics in Rio de Janeiro. The very next season, she led Chicago Red Stars to the semifinals of the championship.

Julie earned her first call for the USA national women’s soccer team in January 2013. She became a part of the 29-woman roster of the national side to face Scotland in February. She then made her senior international debut against Scotland on 9th February 2013. And in April that year, she traveled to Europe for their matches against the Netherlands and Germany. She then made her first tournament appearance during the 2014 Algarve Cup.

Initially, she failed to become a part of the 2014 CONCACAF Women's Championship team. However, she received a call just a day before the tournament as a replacement for Crystal Dunn. That tournament also served as the qualification for the FIFA Women's World Cup in 2015. After participating in the 2015 edition of the grand tournament, she attended the training camp in 2016.

She became a part of the USA national team to participate in the CONCACAF Women's Olympic Qualifying tournament in 2016. She then also performed pretty well in the 2016 Olympic Games in Rio de Janeiro. In that same year, she also participated in the 2016 SheBelieves Cup. Recently on 5th March 2020, she made her 100th international appearance in a match against England in the 2020 SheBelieves Cup.

She took part in the 21-day training camp for the upcoming FIFA Women's World Cup at the U.S. Soccer National Training Center in California in January 2015. And in February that year, she traveled to Portugal as a part of the USA team to participate in the 2015 Algarve Cup. On 14th April that year, she earned her place in the 23-player roster of the United States team to participate in the 2015 FIFA Women's World Cup.

Julie played all seven matches of that tournament and helped her national team to win the 2015 FIFA Women's World Cup.  And for her amazing performance in that grand event, she has also earned her place in the FIFA Women's World Cup All-Star Team that year. Following her World Cup success, her fame instantly faced a surge in the United States. She then changed her position from center back to center midfielder in 2017.

Julie started to shine like never before under the guidance of her coach Jill Ellis. She also received the U.S. Soccer Female Player of the Year in 2017. She again secured her place in the 23-woman squad of the USA national team to participate in the 2019 FIFA Women's World Cup. And for her performance that season, she received her nomination as the best female player alongside some of the greatest female soccer players like Megan Rapinoe and Alex Morgan.

Born on 6th April 1992, Julie is the eldest child of her father David Johnston, and her mother Kristi Johnston. She grew up in the Mesa area of Arizona along with her younger sister Melanie Johnston. Julie is a practicing Christian. Her father first introduced her to soccer and she started training in her regional American Youth Soccer Organization. During their childhood, both the Johnston sisters played for the Sereno Soccer Club in Phoenix.

Julie completed her schooling at the Dobson High School in Mesa. And throughout her high school years from 2006 to 2010, she volunteered as an athletic trainer for her schoolmates. However, she never played soccer for her high school team as she was playing for the Sereno club at that time. Following her high school days, she achieved her place in the National Honor Society.

Julie started dating handsome American football tight end for the Philadelphia Eagles, Zach Ertz, since her early career. They first met in the Stanford University baseball stadium, Klein Field. The couple also got engaged on that game ground in February 2016. Julie then tied her knot with Zach on 26th March 2017 at a beach wedding in Santa Barbara. The couple got featured in the 2017 Body Issue of ESPN Magazine.

According to the recent financial reports of 2020, the current net worth of Julie Ertz is estimated to be around $3 million. Besides her appearance in international football for the United States team, she also earns quite a lot from the Chicago Red Stars. Her husband, Zach Ertz, now has a net worth of nearly $79 million.

Besides leading the USA national women’s team to the success of the 2015 and 2019 FIFA Women’s World Cup, Julie has several personal awards under her name. Some of the most notable amongst those are:

Q. Who is Julie Ertz?

Julie Ertz is a soccer player who currently plays for the National Women's Soccer League franchise Chicago Red Stars. Besides, she now also plays for the United States women's soccer team as a midfielder. She also frequently appears in several magazines.

Q. Who is Julie Ertz married to?

Q. Where did Julie and Zach Ertz meet?

Q. How old is Julie Ertz?

Julie Ertz is currently 29 years old as of 2021. Born on 6th April 1992, she grew up with her younger sister Melanie Johnston. Her parents, David Johnston and Kristi Johnston raised two of the Johnston sisters in the Mesa area of Arizona.

Q. How tall is Julie Ertz?

Julie Ertz is 5 feet 7 inches (1.70 meters) tall. She is taller than the average girl since her childhood days. And now, she has an added advantage during heading scenarios of soccer games due to her height.