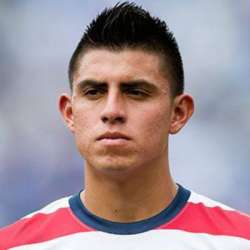 American footballer Joe Benny Corona Crespín, famously known as just Joe Corona, currently plays for the Major League Soccer franchise Houston Dynamo. Besides, he also plays as a midfielder for the United States national football team. He first came into prominence while playing for Club Tijuana since his childhood. However, he played for several other reputed football clubs including Veracruz, Sinaloa, and Club América.

Although he was born in the United States, he was also eligible to play for Mexico and El Salvador due to his parents’ lineage. He first chose to represent the youth side of Mexico and played for the Mexico U22 team. However, he then moved to the United States permanently and started playing for the USA team. Now, he represents the US national football team in international competitions.

During his high school days, Joe started practicing football at the Nomads Academy in 2006 at the age of 16. After going through rigorous training at the academy, he joined the youth academy system of Club Tijuana in 2009. However, he also played for the San Diego State Aztecs during his college career at the San Diego State University in 2008. Right after joining Tijuana, he practiced with the youth squad for a single season before earning his promotion.

Joe has earned his promotion to the Tijuana senior team during the 2009-10 season of the Liga de Ascenso. He scored his first goal for the side in September 2010. In his very first season, he played for 160 minutes in just 3 games. In the next season, Club Tijuana earned their promotion to participate in the Primera División or Liga MX, the top tier league in Mexico. He made his debut in the Primera Division de Mexico in a match against Monarcas.

In his very first season in 2010-11, Joe made 39 appearances for the side. Joe achieved his place in the starting squad 34 times during that season. And in that season, he also scored 6 goals. He joined Veracruz on loan in June 2015 before joining Club América on 13th December 2017. Then on 6th March 2019, Joe joined the Major League Soccer franchise LA Galaxy. And finally, he joined Houston Dynamo on 31st December 2020.

Former United States coach Bob Bradley called Joe to participate in a friendly match for the United States team against Mexico in 2011. However, Bradley was fired from his duty in August 2011. And with that, Joe also failed to get his chance to make his international debut. Mexico then called him to participate in a friendly match against the U22 team of Chile as a preparation for the 2011 Pan American Games.

After appearing in just a single game, he again received a call from the U23 team of the United States. In a qualifying match of the 2012 Olympic Games against Cuba, he scored a brilliant hat-trick. He then made his senior debut in a friendly match against Scotland in May 2012. Shortly after, he also represented in a 2014 FIFA World Cup qualifying match against Guatemala in October 2012.

Born on 9th July 1990, Joe Corona is the first child of Angel Corona and Yanira Corona. His mother, Yanira Corona, is of El Salvador descent while his father, Angel Corona, is of Mexican descent. He grew up in the Los Angeles area with his sister, Gordita Corona. However, Joe moved to Tijuana as a young boy. But after spending a few years, he moved back to San Diego. He completed his high school education from the Sweetwater High School in National City.

According to the recent financial reports, the current net worth of Joe Corona is estimated to be around $3 million as of the 2021-22 football season. Besides, he now gets around $200k salary from his current MLS side Houston Dynamo. Moreover, he also earns from his various sponsorship deals and brand collaborations.

So, here are all the facts abour Joe Corona as of 2021. Feel free to send us your opinion in the comment box below!

Q. Who is Joe Corona?

Joe Corona is a professional football player from the United States. He currently plays for the Major League Soccer franchise LA Galaxy. Besides, he also represents the United States men’s national soccer team in international competitions. He mainly plays as a midfielder for his teams.

Joe Corona currently plays for the Major League Soccer side LA Galaxy. However, he started his professional footballing journey with the Mexican side Tijuana. He then played for many other teams including Veracruz, Sinaloa, and Club América. Joe also represents the United States National football team.

Q. What is the nationality of Joe Corona?

Q. Who is the girlfriend of Joe Corona?

According to the inside report, Joe Corona is currently dating his long-time girlfriend Ana Melissa Valadez. Ana studied in the same college, San Diego State University, with Joe. She completed her graduation in Psychology.