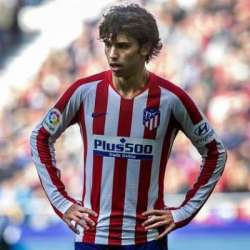 Portuguese footballer João Félix Sequeira, famously known as just Joao Felix, currently plays for the La Liga side Atlético Madrid. Besides, he also plays as a forward for the Portuguese national football team. Known for his prowess in dribbling and speed, Felix can comfortably operate as an attacking midfielder or even as a winger. The Portuguese media often referred to him as “Menino de Ouro” which means “The Golden Boy”.

He became a sensation for the media after he scored a brilliant hat-trick in the UEFA Europa League at the age of just 18. His performance catches the eyes of several richest football clubs around the globe. However, Atlético Madrid signed him for a record transfer fee worth €126 million. On that very same season, he achieved his place in the shortlist of the Ballon d'Or. Besides, Felix also achieved third place in the Kopa Trophy.

Upon his joining, Felix started playing for the reserve team of Benfica. He then made his professional debut in a LigaPro match against Freamunde on 17th September 2016. And with that debut, he became the youngest footballer to achieve such a feat in Benfica B. In that season, he went on to play 13 matches while scoring thrice. His big break came after he scored a brilliant hat-trick against Famalicão on 30th January 2018.

During that time, he also participated in the UEFA Youth League and helped Benfica to reach the finals for the tournament. He then earned his promotion to the first squad of the Benfica side. Felix made his senior debut in a Primeira Liga match against Boavista on 18th August 2018. He then scored his first senior goal in the Lisbon derby against Sporting Lisbon on 25th August 2018. Shortly after, he scored his first Portuguese Cup goal in the quarterfinal match against Vitória de Guimarães on 16th January 2019.

He created a solid buzz in the media after scoring a marvelous hat-trick against the Eintracht Frankfurt at the UEFA Europa League on 11th April 2019. And that feat made him the youngest footballer ever to score a hat-trick in the Europa League. In his debut season, he scored 20 goals while scoring 15 times in the Portuguese league alone.

Felix signed a seven-year contract with La Liga club Atlético Madrid on 3rd July 2019 for a record transfer fee of €126 million. It is the most expensive signing in the history of €126 million and the fourth most expensive signing in football history. Following the departure of one of the best football forwards, Antoine Griezmann, Felix received the No.7 shirt at the club upon his arrival. Shortly after, he made his debut in a La Liga match against Getafe on 19th August 2019.

He won the Golden Boy Award on 27th November 2019. One of the most successful football managers, Diego Simeone then started playing him in various positions. However, he failed to deliver the expected performance thus attracting criticism from the Spanish press. Shortly after, he made his debut in the Supercopa de España against Barcelona on 9th January 2020. He then made his Copa del Rey debut against Cultural Leonesa on 23rd January 2020.

Felix suffered another leg injury in a match against CD Leganés on 26th January 2020. He was sidelined for a month before making his return against Villarreal on 23rd February 2020. On 25th May 2020, he suffered his third injury in his knee and remained sidelined for three weeks. However, he made his comeback in a UEFA Champions League match against RB Leipzig on 13th August 2020.

Felix made his international debut for the Portuguese U-18 team against Norway on 14th June 2017. He scored a brace in his debut match. Shortly after, he made his U-21 debut in the 2019 UEFA European Under-21 Championship on 10th October 2017. He then made his debut for the U-19 team in a match against Turkey on 15th January 2018. Felix then scored his first international goal for the U-21 team against Liechtenstein on 23rd March 2018.

Portuguese manager Fernando Santos called Felix for the senior national team on 15th March 2019. He primarily selected to participate in the UEFA Euro 2020 qualifying matches. However, he remained sidelined due to his foot injury. He then against achieved his place in the Portuguese squad against participating in the 2019 UEFA Nations League Finals.

Born on 10th November 1999, Joao Felix is the first child of his father, Carlos Felix, and his mother, Carla Felix. Both of his parents are teachers in Portuguese. Felix grew up in the Viseu city of Portugal with his younger brother Hugo Felix. Hugo currently plays for the youth academy system of Benfica and follows the same path as his brother.

Felix is currently in a romantic affair with Margarida Corceiro. She is a renowned Portuguese actress. During his childhood days, Felix considered Rui Costa and one of the most handsome footballers, Kaka, as his idols. During the COVID-19 pandemic, Felix donated medical equipment for a local hospital at his native place Viseu.

According to the current financial reports, the net worth of Joao Felix is estimated to be around $25 million as of the 2021-22 football season. He currently gets around $9 million per year as the salary from his current football club Atlético Madrid. Besides his footballing income, he also earns quite a lot for his various sponsorship deals.

So, here are the facts about this young player. Feel free to drop your opinion in the comment box below!

Q. Who is Joao Felix?

Joao Felix is a Portuguese footballer who currently plays as a forward for La Liga side Atlético Madrid. He also plays for the Portuguese national football team. However, he previously played for two other Portuguese Primeira Liga side FC Porto and Benfica.

Joao Felix mainly plays a forward for both the Atlético Madrid and Portuguese international squad. However, he can comfortably operate in the winger and attacking midfielder’s position. Diego Simeone tried him in various positions in the 2020-21 football seasons.

Q. How much is Joao Felix worth?

According to the recent estimates, the net worth of Joao Felix is around $25 million as of the current 2021-22 football season. He now also gets nearly $9 million worth of salary from La Liga side Atlético Madrid. Besides, he also has several sponsorship deals and brand collaborations under his name.

Q. Who is the girlfriend of Joao Felix?

Joao Felix is currently in a relationship with Margarida Corceiro. This Portuguese lady is an actress and an Instagram model. She has close to a million fans in her Instagram profile. She is currently signed with the Central Models agency for her contracts.