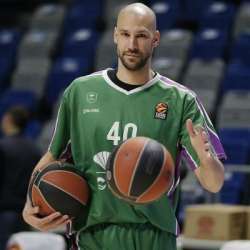 Retired American basketball player James Augustine mainly played as a forward during his heydays. He started his career while playing for the Fighting Illini of the University of Illinois in college basketball. After delivering spectacular performances in NCAA, he caught the eyes of several amazing NBA franchises throughout the United States. Besides, several football pundits also ranked him among the best basketball prospects in his final college year.

Augustine took admission to the University of Illinois in 2002. And since his first year, he started playing for the Fighting Illini men’s basketball team. Even as a freshman, he became the regular starter of his team. He also helped the side to become the runners up at the Big Ten that year. He finished his college basketball career with 1383 points in total and 1023 rebounds.

He is the first and the only player in Fighting Illini’s history to score both more than 1k career points and rebounds. Augustine also topped his college list with the highest field goal percentage. During his college career, he played a total of 137 official games for the Fighting Illini team. That feat is also the best in the sport's history of the University of Illinois.

During the 2006 NBA Draft, Orlando Magic selected him as the 41st overall pick. And he stayed there till the 2008 basketball season. During that time, he also played in the NBA development league called G League. He signed a new contract with the Spanish league franchise Gran Canaria in August 2008. Augustine then signed a single-season contract with the fellow club Power Electronics Valencia on 30th July 2010.

After a single season, he moved to UCAM Murcia in August 2011 before joining the Russian basketball side Khimki in May 2012. After staying there for four seasons, he signed a new contract with CSKA Moscow on 4th July 2016, although they terminated the contract on 8th July 2017. Shortly after, he signed a new contract with the Spanish basketball side Unicaja on 3rd August 2017. However, he announced his retirement from professional basketball on 20th October 2019.

Born on 27th February 1984, Augustine spent his childhood in the Mokena village in Illinois despite being born in Midlothian. He grew up in Illinois with his father, Dale Augustine, and his mother, Barb Augustine. His uncle, Jerry Augustine, was a professional baseball player and played for the MLB franchise Milwaukee Brewers. James is also the cousin of one of the best NFL safeties, Nick Sorensen.

According to recent financial reports, the current net worth of James Augustine is estimated to be around $2 million as of the 2020-21 basketball season. He received around $700k yearly salary on average during his active basketball career. During his stint at Europe, he is associated with several companies as sponsors.