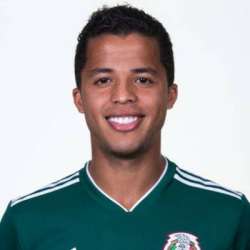 Mexican footballer Giovani dos Santos Ramírez, famously known as just Giovani Dos Santos, currently plays for the Liga MX franchise Club América. Besides, he also plays as a forward for the Mexican national football team. Besides his usual position as a forward, he can also play as a second-striker, winger, or even as attacking midfielder. A product of FC Barcelona’s La Masia football academy, he has earned his promotion to the first team in 2007.

World Soccer Magazine named him among the best teen talents in the football world that season. However, he then played for many teams including Tottenham Hotspur, Galatasaray, Mallorca, Villarreal, and LA Galaxy. He also made his mark in the international football and represented the Mexican side in 2010, 2014, and 2018 version of the FIFA World Cup. Besides, he also helped his country to win the gold medal at the 2012 Summer Olympics in London.

Dos Santos joined one of the best sports academies, La Masia, at the age of just 13. Shortly after, he started playing for the Barcelona Juvenil team in the A category. During that time, he also participated in the youth version of the Copa del Rey. He became a part of the Barcelona senior squad in the 2006 football season. In that same season, he scored his first professional goal for Barcelona in a friendly against Danish club AGF Aarhus on 29th July 2006.

Barcelona then named him in the 23-man squad of the club on 28th November 2006. That team went to participate in the FIFA Club World Cup in Japan that year. Dos Santos received his dual nationality in Spain and Mexico on 29th August 2007. Shortly after, he made his competitive debut for the Barcelona team in a La Liga match against Athletic Bilbao on 2nd September 2007 at the age of just 18 years and 114 days.

He made his debut in the UEFA Champions League in a group-stage match against Lyon on 20th September 2007. Dos Santos came to the ground as the 79th-minute substitute of Xavi. His first big break came after he scored a brilliant hat-trick against Real Murcia on 17th May 2008. However, that was the very last game that he played for one of the richest football clubs, Barcelona.

He joined the Premier League club Tottenham Hotspur with a transfer fee of €6 million on 18th June 2008. Shortly after, he scored a brace against UD Tavernes during the 2008-09 pre-season tour. In the Feyenoord Jubileum Tournament trophy, he scored the winning goal against Borussia Dortmund. In that same season, he scored his first UEFA Cup goal against Shakhtar Donetsk on 26th February 2009.

Dos Santos suffered a tragic injury in the League Cup match against the Preston North End in the 2009-10 football season. Spurs then-manager Harry Redknapp openly expressed his grief for Dos Santos as he used to stay late in the nightclubs and also used to come to the training pretty late. However, he went on to score a goal in the UEFA Europa League group-stage match against Shamrock Rovers on 29th September 2011.

He joined the fellow Premier League club Ipswich Town in a loan move in March 2009. Dos Santos made his debut for the club against Reading FC on 14th March 2009. Shortly after, he scored his first goal in a match against Burnley. He took his transfer to the Turkish side Galatasaray in January 2010. He made his debut in the club against Denizlispor in a Süper Lig match on 31st January 2010. Finally, on 31st January 2011, he took his transfer to La Liga club Racing de Santander.

He signed a four-year deal with Spanish La Liga side Mallorca on 31st august 2012. Upon his arrival at the club, he received the prestigious No.9 shirt. He then made his debut in a match against Sevilla on 22nd October 2012. Shortly after, Dos Santos scored his first goal for the club in a match against Espanyol on 18th January 2013. However, he took his transfer to fellow La Liga side Villarreal on 9th July 2013.

He signed a $7 million deal with the MLS side LA Galaxy as a designated player on 15th July 2015. Shortly after, he made his debut for the club in a CONCACAF Champions League match against Central FC on 6th august 2015. In that same month, he made his MLS debut against Seattle Sounders FC. For his performance that season, Dos Santos achieved his place in the long list of the FIFA Ballon d’Or.

He became a part of the MLS All-Star Game in July 2016. Dos Santos then made his debut in the U.S. Open Cup quarterfinals against Seattle Sounders on 21st July 2016. For his performance that season, he again achieved his place in the 2017 MLS All-Star Game. However, the MLS side released him while exercising the offseason buyout clause on 1st March 2019.

He joined the Mexican side Club América on 6th July 2019. He signed a three-year contract with the club to appear in the Liga MX and was also handed the No.10 shirt. However, he suffered a horrific thigh injury in his first-ever Súper Clasico against Guadalajara on 28th September 2019. He went for surgery of the quadriceps and remained outside the ground for six weeks.

He first represented the U12 team of Mexico in the Danone Nations Cup in 2001 held at the Parc des Princes. He achieved the golden boot as the top scorer of the tournament. He then represented his country in the FIFA U-17 World Championship in 2005. Dos Santos then participated in the FIFA U-20 World Cup in 2007. He achieved the Bronze Ball as the third-best player of the tournament that year.

He has achieved his place in the Mexico under-23 squad in June 2012. That team also went to the 2012 London Olympics. He scored his first-ever Olympic goal in a match against Gabon on 29th July 2012. He helped his team to final of the London Olympics that year. Mexico, on the other hand, won the gold medal while defeating Brazil at the final.

Hugo Sánchez picked him for the Mexican senior squad in 2007. Shortly after, he made his international debut in an exhibition game against Panama on 9th September 2007. He then scored his first international goal in a match against Venezuela on 24th June 2009. He then made his debut in the CONCACAF Gold Cup and scored against Haiti on 19th July 2009. In that tournament, he helped Mexico to win the trophy and also became the player of the tournament.

He made his debut in the 2010 FIFA World Cup qualifier against Costa Rica on 5th September 2009. And in the main tournament, he completed 138 passes in total. Besides, he also achieved the runner-up spot in the FIFA Young Player of the Tournament award. He then went on to appear in both 2014 and 2018 version of the FIFA World Cup. Till now, he has appeared in more than 100 matches for the Mexican national football team.

Born on 11th May 1989, Giovani Dos Santos is the second child of his father, Zizinho, and his mother, Liliana Ramírez. Zizinho was a professional footballer from Brazil and played in professional clubs like América and León. However, his mother, Liliana, is of Mexican origin. Dos Santos grew up in the Monterrey city of Mexico with his two brothers, Éder and Jonathan.

Both his brothers are professional players. Éder played for the reserve team of América while Jonathan now plays for the MLS side LA Galaxy. Although he is unmarried, Dos Santos is linked with Alexia Imaz as his recent girlfriend.

According to the current financial report, the net worth of Giovani Dos Santos is estimated to be around $10 million as of 2021-22 football seasons. He now gets around $3.75 million salary per season from his current football side Club América. Besides his footballing income, he also made his fortune from his various sponsorship deals.

He recently helped Club América to win the Campeón de Campeones in 2019. Besides, he also helped the Mexican national team to win the CONCACAF Gold Cup three times till now. However, he also has many accolades under his name. Some of the most notable among those are as follows.

So, here are all the facts about Giovani Dos Santos. Feel free to send us your opinion about this biogrphy in the comment box below.

Q. Who is Giovani Dos Santos?

Giovani Dos Santos is a professional football player from Mexico. A product of La Masia football academy, Dos Santos currently plays for the Liga MX side, Club América. Besides, he also plays as a forward for the Mexican national football team.

Dos Santos currently plays for the Club América of the Mexican top-flight league as a forward. Besides, he also participates in the international matches for the Mexican national team. Previously, he played for many other clubs including Barcelona, Tottenham Hotspur, Villarreal, and LA Galaxy.

Dos Santos joined the MLS side LA Galaxy as their designated player on 15th July 2015. The club reportedly paid a $7 million transfer fee to get him on their side. However, LA Galaxy released him while exercising the offseason buyout clause of his contract on 1st March 2019.

Q. How much is Giovani dos Santos worth?

The current net worth of Giovani dos Santos is estimated to be around $10 million as of the 2020-21 football season. Besides, he gets nearly $3.75 million salary from his current club Club América. Moreover, he also earns quite a good amount of money for his various sponsorship deals and collaborations.