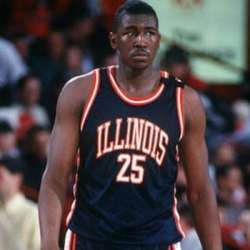 Former American-Israeli basketball star Deon La velle Thomas, famously known as just Deon Thomas spent his time in American college basketball and National Basketball Association during his heydays. He is among the very few players from foreign origin who bagged the prestigious Illinois Mr. Basketball award as an accomplished forward. Since his childhood days, he caught the attention of basketball pundits as he helped his school team to lift the Chicago Public League title.

After having a successful stint at high school basketball, he opted to play at the NCAA league. Thomas joined the Fighting Illini Men’s basketball team at the University of Illinois.

During his time at the college, he became the all-time top scorers in the history of Fighting Illini. After a huge hype, he was picked by one of the oldest NBA franchises, Dallas Mavericks, as the 28th pick. However, he opted to play in Europe and Israel.

Thomas started playing basketball for the Neal F. Simeon Vocational High School in Chicago during his high school days. For his immense talent, he became a star player in Chicago within a very short period.

During his junior year in 1988, he led the Neal F. Simeon’s Wolverines basketball team to win the Chicago Public League title.

During his senior year in 1989, he was named as the Illinois Mr. Basketball for his brilliant performance for the wolverines. In that season, he has achieved his place in the McDonald's All-American Game. Interestingly, that game also featured one of the greatest NBA players of all time, Shaquille O'Neal.

After his brilliant high school basketball stint, Thomas took admission at the University of Illinois and started playing for the Fighting Illini men’s basketball team.

He delivered a great performance throughout his entire college career and scored a total of 2129 points. With that feat, he became the all-time leading scorers of Fighting Illini. He also achieved a spectacular 18 points per game average.

He is the only basketball player ever to score more than 2k points in a college career. And for that, the college authority inducted him into the Illini Men's Basketball All-Century Team in 2004. He created solid hype in the media for his brilliant performance. And, several NBA franchises showed interest in him for the 1994 NBA draft.

NBA franchise Dallas Mavericks picked him as the 28th overall selection in the 1994 NBA Draft. However, he opted to play in Europe instead. In that same year, Thomas joined the Spanish basketball side Bàsquet Manresa.

He then joined Gymnastikos S. Larissas followed by the Bulgarian side, CSKA Sofia. Thomas then moved to Maccabi and played for both Givat Shmuel and Maccabi Haifa.

He is one of the most successful American basketball players in the European leagues. However, he had several offers to play at the NBA. He was once accused of taking benefits in return to play for the Fighting Illini team. However, he denied that claim in an interview with Tema Sport newspaper as well as the Channel 3 of Bulgaria.

After his retirement from active sports, Thomas joined the Lewis and Clark Community College in Illinois as their head coach. He then joined the University of Illinois-Chicago and started working as an assistant basketball coach for its men’s team. Thomas, along with his co-host Doug Altenberger, then started working as an announcer for the Fighting Illini Sports Network in 2016.

Born on 24th February 1971, Thomas spent his childhood in Chicago, Illinois, United States. During his basketball career, he falls for an Israeli woman and married her after a short romantic stint. He is now an Israeli citizen.

According to the recent financial reports, the current net worth of Deon Thomas is estimated to be around $3 million as of the 2021-22 football season. Although he announced his retirement from professional basketball, he earned his money mostly from his coaching and advising duties. Besides, he also earned quite a good amount of money as an announcer for television networks.