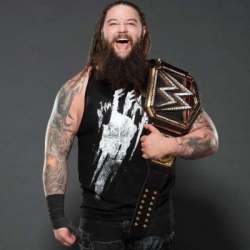 American wrestler Windham Lawrence Rotunda, famously known as Bray Wyatt, is currently signed with WWE. And since his first appearance, he proved his popularity and talent in the wrestling circuit throughout the world. He has already become the WWE World Champion twice now. Besides, he also held both the Universal Championship and WWE Championship. So, here are the complete details of his life, profession, accolades, income, love life, and many more.

Wyatt created a huge sensation during his first appearance in WWE. And since then, he became quite a regular name in several storylines of WWE. He now mainly performs in the ‘SmackDown’ segment with his ring name Bray Wyatt ‘The Fiend’. He first started his professional wrestling career with FCW (Florida Championship Wrestling), a development territory of WWE. However, he then rebranded himself as Bray Wyatt as he started to appear in the main roaster in 2013.

Although he mainly performed as just Bray Wyatt in the SmackDown segment of WWE, he also often appeared as ‘The Fiend’. This is actually a sinister alter ego of Wyatt. He also got quite a success with this name as he won his first Universal Championship with his alter ego. Wyatt then also won the WWE World Champions with this name.

Bray has a long lineage of professional wrestlers as he belongs to a family completely revolving around wrestling. Blackjack Mulligan, his grandfather, first made an impact on the wrestling circuit during his heydays. Bray’s father, Mike Rotunda, also made his name as one of the most popular WWE wrestlers during his name. Besides, two of his uncles, Kendall Windham and Barry Windham, also became quite a known name during their times.

Bray represents the third generation of his wrestling family. However, his brother, Taylor Rotunda, also now performs in the professional wrestling circuit under the nickname ‘Bo Dallas’. Bray and Bo first started appearing as a tag team in the Florida Championship Wrestling. They also won the tag team championship twice. Shortly after, he got his chance in the main roaster in 2009.

Wyatt then became a major character in the main roster of WWE in 2020. And till 2012, he appeared under his nickname ‘Husky Harris’. He established himself as a cult member of the famous group, The Nexus. However, he failed to get the kind of popularity that he deserved during that three-year stint in WWE.

Windham Rotunda rebranded himself as ‘Bray Wyatt’ in his return to the developmental territories of WWE. He then made his comeback in the main roster of WWE in 2013 as a cult leader of the notorious and villainous ‘The Wyatt Family’. Bray became a member of the group consisting of Randy Orton and Luke Harper to win the Tag Team Championship of SmackDown. He then joined Matt Hardy and won the Tag Team Championship of WWE Raw.

Wyatt took a brief pause in 2018 and made his second comeback in 2019. He introduced his alter ego ‘The Fiend’ during that time. Besides, he also started a new gimmick of child entertainer and started hosting a show called ‘Firefly Fun House’. Till now, he represents both of his personalities in the main roaster of WWE.

Wyatt relaunched himself in the main roster of WWE in 2019 after taking a brief pause since 2018. He started appearing as a child’s TV show presenter who runs a daily show called ‘Firefly Fun House’. And in his ‘Bray Wyatt’ ego, he projected himself as he is seeing the wrongdoings and errors of his early life. But at the same time, he also introduced his alter ego called ‘The Fiend’.

Wyatt started wearing a mask and appears as also ‘The Fiend’. While the friendly child-loving ego only started to appear in a gimmick show called the ‘Firefly Fun House’, his sinister ego ‘The Fiend’ does all his in-ring wrestling. However, the sinister ego only appears against those wrestlers who did something wrong to her main child-loving ego. Famous journalist Dave Meltzer once called his ‘The Fiend’ character as ‘genius’ as an in-ring performer.

Wyatt started appearing as a child TV show presenter presenting ‘Firefly Fun House’ with his main ego. But at the same time, he also introduced his alter ego called ‘The Fiend’. But, his sinister ego mainly appears with a mask that also created a huge sensation during his first appearance in the main roster of WWE in 2019.

Famous makeup artist and one of the best special effect designers, Tom Savini, designed the mask for him. The artist himself first revealed that in his Twitter handle. Most critics instantly recognize the mask as a brilliant piece of art. All his fans now clearly appreciate that the mask perfectly complements his dark alter ego ‘The Fiend’.

Wyatt first made his wrestling debut with his ring name ‘Alex Rotundo’ in the 2009 edition of FCW (Florida Championship Wrestling). However, he later changed his ring name to ‘Duke Rotundo’ during that time.  He then joined NXT with his new ring name ‘Husky Harris’ in June 2010. Wyatt partnered with Cody Rhodes and made his NXT debut in a tag team match on that same month.

He introduced his new ring name ‘Bray Wyatt’ way back in April 2012. During that time, he also associated with Eli Cottonwood for the Florida Championship. In July 2012, he made his debut in the reboot of NXT organized in the Full Sail University. He defeated veteran wrestler Aiden English in that match. During that same year, he formed ‘The Wyatt Family’ and introduced Luke Harper and Erick Rowan as his sons.

He made his first solo appearance on 26th October 2014 in a ‘Hell in a Cell’ match between Seth Rollins and Dean Ambrose. After making regular appearances till 2018, he took a brief pause from professional wrestling. Several absurd vignettes started to air on WWE in April 2019 as Wyatt also began to appear in a pre-recorded children's program called Firefly Fun House. He hosted that surreal program with a short beard, lean physique, and different hairstyles.

The absurd vignettes and his TV show ‘Firefly Fun House’ featured several characters that are also sinister in nature. Some of the most notable characters are Mercy the Buzzard, Abby the Witch, Huskus the Pig Boy, and Ramblin' Rabbit. Few of the episodes also feature Mr. McMahon as a part of the main storyline. Shortly after, he appeared with an alter ego called ‘The Fiend’. He wore absurd clothing and a demonic mask in his alter ego.

Bray made his first official appearance as ‘The Fiend’ on 15th July 2019 against Finn Bálor. He also introduced one of the best finishing moves in WWE, Sister Abigail. Recently in February 2020, Goldberg challenged him in the Universal Championship. The match was then branded as the ‘Super ShowDown’. Sadly, Wyatt lost the match against Goldberg while ending his long-standing title reign that continued for 118 days.

Wyatt projected himself as the leader of ‘The Wyatt Family’ during his appearance between 2013 and 2018. He also introduced himself as a demonic cult leader during that time. He used surreal music by Mark Crozer for his entry with lanterns in the dark WWE arena. The character took heavy inspiration from the 1991 cult film, Cape Fear. Since 2013, he used a typical faceplant called Sister Abigail as his finishing move.

For his entry as ‘The Fiend’, he started using a heavy metal cover by Code Orange. He also introduced a new finishing move called the mandible claw. His alter ego is projected to have inhuman strength and endurance. Many of his match as the ‘The Fiend’ was also conducted under red lights.

Born on 23rd May 1987, Windham Lawrence Rotunda aka Bray Wyatt spent his childhood days in the Tampa suburb of Florida. He started his schooling at Hernando High School. Since his high school days, he showed his prominence in wrestling. And during 2005, he won his first-ever state wrestling championship in the 275-pound category. In that same year, he also earned his graduation.

Besides wrestling, Wyatt also played American football during his school days as a defensive guard. Besides, he also played two seasons for the College of the Sequoias in California. During that time, he has earned his place in the second-team All-American as a sophomore. He then received a football scholarship from Troy University and played for them in two seasons.

Wyatt first married his college-day sweetheart Samantha. However, the couple filed a divorce in 2017. During that time, Wyatt claimed that his now ex-wife issued a ‘defamatory statement’ to ruin his wrestling reputation. Samantha, on the other hand, also claimed $15k per month from Wyatt as a spouse and child support. However, the couple went for mediation in Florida.

After the divorce, a rumor about his relationship with famous WWE announcer JoJo Offerman started to appear in various media. Shortly after, they declared that they are having a child. The first son of Wyatt and JoJo, Knash, was born on 18th May 2019.

Staring from the Comeback Wrestler of the Year by the CBS sports in 2019 to the Gooker Award by the WrestleCrap, there are several awards and accolades that he has under his name. Some of the most notable WWE awards are as follow:

So, here goes all the interesting facts about the famous WWE wrestler Bray Wyatt aka The Fiend. We hope you liked this article. For any kind of suggestions, feel free to drop your valuable opinion in the comment box below.

FAQ Regarding Bray Wyatt 'The Fiend'

Q. Who is Bray Wyatt?

American wrestler Windham Lawrence Rotunda is famously known by his nickname Bray Wyatt aka ‘The Fiend’.He currently participates in the WWE, especially in the SmackDown segment of the franchise. Wyatt is a WWE Champion and WWE Universal Champion. Besides, he also held the WWE Raw Tag Team Championship title.

Q. How old is Bray Wyatt?

Bray Wyatt is 34-year old. He was born on 23rd May 1987 in Brooksville city in Florida, United States. He spent his childhood days with his father Mike Rotunda and Stephanie Rotunda in the Tampa suburb.

Q. What happened to Bray Wyatt?

After appearing as Bray Wyatt as the head of ‘The Wyatt Family’ in the WWE, he started appearing solo in the main roaster of WWE. After taking a brief pause from 2018 to 2019, he relaunched himself with his alter ego ‘The Fiend’. He now appears as both Bray Wyatt and ‘The Fiend’ in WWE.

Q. Where is Bray Wyatt?

Following a head-on traffic collision in the Tampa suburb in Florida, Bray Wyatt took a brief pause from WWE for his recovery from this fatal accident. And in 2019, he again came back on WWE with his alter ego ‘The Fiend’. He now participates in WWE, especially in SmackDown, with both of his personalities.

Windham Lawrence Rotunda is the real name of Bray Wyatt. He mostly uses the name ‘Bray Wyatt’ or ‘The Fiend’ for his onstage appearance for WWE. He also appeared as ‘Husky Harris’ when he was a part of the group called ‘The Nexus’. Wyatt also appeared as the head of ‘The Wyatt Family’.

Q. Where is Bray Wyatt from?

Bray Wyatt was born in Florida in the United States. He grew up in Brooksville city in a wrestling family where he is a third-generation wrestler. However, Wyatt currently lives in Miami in Florida after finding huge success in WWE.

Q. How tall is Bray Wyatt?

Weighing over 285lbs (129kgs), Bray Wyatt is 6 feet 3 inches (1.91 meters) tall. He has achieved unprecedented success in not just wrestling but also in collegiate football.  And, his height and heavy built played a large role in his success.

Q. Who is Bray Wyatt's brother?

Taylor Michael Rotunda, who appears with his ring name ‘Bo Dallas’, is the brother of Bray Wyatt. Bo currently also appears in the SmackDown segment of WWE besides Bray Wyatt ‘The Fiend’. Bray and Bo won the FCW Florida Tag Team Championship together as a tag team.