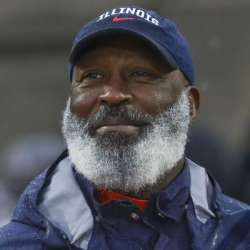 Smith joined the Tampa Bay Buccaneers and served as the head coach from the 2014 to 2015 NFL season. He also served as the defensive coordinator of the NFL franchise St. Louis Rams. During his time with the NFL teams, he won the Super Bowl twice. And now, he is more into college football since he left the Buccaneers in 2015.

During his time with the Big Sandy High School, Smith started playing American football. He played as both linebackers and defensive end and won the all-state honors thrice. He also helped his high school team to become the state champions three times consecutively from 1973 to 1975.

Shortly after finishing his schooling, he joined the University of Tulsa and started playing under John Cooper. He again played as both linebackers and defensive end and became the All-American twice.

Right after he graduated from college, Smith joined his school, Big Sandy, as a defensive coordinator. After a single season, he moved to the Cascia Hall Preparatory School in Tulsa. He then joined the University of Tulsa as the linebacker coach in 1983.

Shortly after, he joined the University of Wisconsin–Madison in 1987. After a single season, he took his transfer to Arizona State University in 1988 and remained there till 1991.

Smith joined the University of Kentucky during the 1992 college football season. However, he stayed there for just a single season before moving to the University of Tennessee in 1993. He then started working as a defensive backs coach.

During that time, he guided several great NFL linebackers of that time. Shortly after, he joined the Ohio State University and remained there for the 1995 season.

Under head coach Tony Dungy, Smith started working as the linebacker coach for the NFL side Tampa Bay Buccaneers in 1996. He spent there for five seasons before joining the fellow NFL side St. Louis Rams as the defensive coordinator.

During that time, the Rams won the NFC Championship in 2001. Shortly after, he joined one of the most successful teams in the Super Bowl, The Chicago Bears, in 2004 as their head coach.

Smith won the NFL Coach of the Year Award from the Associated Press in 2006. He also led the team to participate in the Super Bowl XLI. Shortly after, he signed a new four-year deal with the Bears in 2007.

During that time, he coached several best NFL quarterbacks including Brian Griese, Kyle Orton, and Rex Grossman. However, the conflict between him and manager Jerry Angelo started during the 2009 football season.

Smith witnessed a sharp decline in his coaching career as Bears lost the first five straight games in the 2011 NFL season. However, the team recorded their 300th takeaway under Smith during the 2012 football season.

He again failed to give a promising performance that season and lost his position. Chicago Bears fired him on 31st December 2012 after nine years of service as the head coach.

He gave the interview to become the head coach of the Houston Texans on 16th December 2013. However, he also gave the interview to the Tampa Bay Buccaneers and Detroit Lions. He signed a five-year contract with the Buccaneers on 2nd January 2014. During that time, he replaced former head coach Greg Schiano. He failed to display a good performance and was fired on 6th January 2016.

Smith joined the University of Illinois as their head coach on 7th March 2016. He signed a six-year deal worth around $21 million with the team. That contract granted him up to $2 million salaries each year with up to $8 million performance bonuses. Fighting Illini recorded a 6-6 run in the regular season under his guidance. They also recorded their first bowl game since 2014.

Born on 8th May 1958, Lovie is the child of Thurman Smith and Mae Smith. The Smith family belongs to African-American origin. He grew up in the Big Sandy area of Texas, although he was born in Gladewater.

Lovie was named after his great aunt, Lavana. He was a great supporter of the American Diabetes Association as his mother was blind due to Diabetes. Lovie also founded the Lovie and MaryAnne Smith Foundation to help poor kids to meet their educational goals. He also worked as the Grand Marshal of the NASCAR Nextel Cup Series in 2007.

According to the recent financial reports, the current net worth of Lovie Smith is estimated to be around $15 million as of the 2021-22 football season. He now gets around $5 million yearly salaries with nearly $10 million performance bonuses from his current team Houston Texans.

The Associated Press named him for the NFL Coach of the Year Award in 2005 for his remarkable performance as the head coach. He was also inducted into the Texas Sports Hall of Fame in 2012.