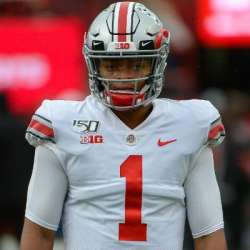 American football player Jeffrey Okudah, famously known as just Jeff Okudah, currently plays as a cornerback for the National Football League franchise Detroit Lions. He was a well-known face in the college football scene of the USA. Okudah played college football for the famous Ohio State Buckeyes Football Team of the prestigious Ohio State University. However, he decided to forgo his final year at the university to participate in the 2020 NFL Draft.

Since his college days, several football pundits and coaches named him among the top football prospects. During his time with the Buckeyes, he has achieved his place in the All-American by unanimous decision. Besides, he also achieved his place in the final nomination list of the Jim Thorpe Award. And now, he is widely considered as one of the best NFL cornerbacks in the 2020-21 American Football season.

Since his childhood days, Okudah showed interest in American Football. He then took his admission to the South Grand Prairie High School in Texas. During his school days, he started playing for the South Grand Prairie school team. Shortly after, he became a five-star recruit. In his final year at school, he attracted the attention of several college teams around the States due to his impeccable skills and extreme potential.

In his junior year, he completed 3 interceptions in total. Besides, he also recorded 34 tackles and defended 9 passes. That amazing stint helped him to achieve his place in the 2019 College Football All-America Team by unanimous decision. Besides, he also became the finalist of the prestigious Jim Thorpe Award. However, he forgoes his final year at the university after much speculation to appear in the 2020 NFL Draft.

Since he announced his wish to appear in the 2020 NFL Draft, he was named as one of the top cornerback prospects. Several teams went after him to get him on board. However, one of the most successful NFL sides, the Detroit Lions, picked him as the third overall selection. He then signed a rookie contract with the side on 13th July 2020. That contract will let him stay at the Lions squad for the next four seasons.

Okudah joined the training camp after signing the contract with the Lions. However, he suffered a tragic hamstring injury during the training camp and missed the opening game of the 2020-21 NFL season. He then made his return after a 2-week gap. Okudah made his debut against the Green Bay Packers and recorded a total of 96 yards. The very next week, he recorded his first interception against Arizona Cardinals.

Born on 2nd February 1999, Jeff is the youngest child of his father, Sam Okudah, and his mother, Marie Okudah. He grew up in the Grand Prairie city of Texas, United States, along with his older sister. After battling with cancer, Jeff lost his mother when he was just 17 years old. His older sister is also in sports and was enrolled in the track and field program during her high school days.

According to the recent financial reports, the current net worth of Jeff Okudah is estimated to be around $5 million as of the 2020-21 NFL season. He signed a four-year contract with Detroit Lions that’s worth $33.5 million. He also received a $21.9 million signing bonus. Moreover, he now gets around $6.1 million yearly salaries from his current football side. Besides, Jeff also has several endorsement deals and sponsorships under his name.

Since his childhood days, he always attracted attention for his impeccable prowess in American Football. And during his time with the Ohio State, He helped the side to achieve marvelous victories. Besides, he has several accolades under his name. Some of the most notable awards that he received till now are as follows.