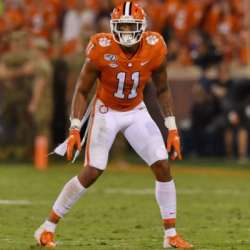 American football star Isaiah Simmons currently plays as a linebacker for the National Football League franchise Arizona Cardinals. He previously played college football for the Clemson Tigers Football Team of the prestigious Clemson University. And since that time, he had high regards from both football pundits and coaches alike. As he showed interest in participating in the NFL draft this year, he caught the attention of several NFL sides.

After becoming the eighth overall pick for the Arizona Cardinals, he is now widely regarded as one of the best NFL linebackers in the 2020-21 American football season. Besides, he was also known as one of the best players Clemson has ever produced during his college football career. Although he mainly plays as a linebacker, Simmons can be deployed as safety, cornerback, and even as a defensive end.

Simmons started his high school education in the prestigious Olathe North High School in Kansas. And right after joining the school, he started playing American football for the school team. He mainly played as a wide receiver and defensive back at that time. However, he later changed his starting position. He helped the school team to achieve several victories. And in February 2016, he announced his commitment to Clemson University.

Despite having a brilliant performance in his high school career, Simmons was redshirted in his initial year at Clemson University. However, he played 14 regular-season games as a safety in 2017 and recorded 49 tackles. In the following year, he changed his position to linebacker and recorded 97 tackles in 15 regular-season games. Although he had the opportunity to appear in the 2019 NFL draft, he returned to his college team.

For his brilliant performance as a linebacker in the following year, he received the prestigious Butkus Award. He also showed his excellence in academics besides his playing career and graduated with a degree in Sports Communication. Simmons also showed his positional versatility during his college career as he had the potential to become one of the best safeties. However, he forgoes his final year at the college to participate in the 2020 NFL draft.

Following his college career, Simmons participated in the 2020 NFL combine and completed a 40-yard dash in just 4.39 seconds. Due to the pandemic situation, the NFL organized the draft virtually in 2020. However, Simmons is one of the 58 participants to get the invitation to appear in the draft. One of the most successful NFL teams, the Arizona Cardinals, then selected him as the eights overall pick.

Right after signing a contract with the Cardinals, he started practicing with the team. He failed to get much playing time due to the pandemic crisis. However, he recorded five snaps in week 7 of NFL. His biggest success came after he recorded his first NFL interception against one of the best NFL quarterbacks, Russell Wilson, on Sunday Night Football.

Born on 26th July 1998, Isaiah Simmons is the first child of his father, Victor Sr., and his mother, Denise Simmons. His father was also a collegiate track and field athlete who represented a local club called Olathe Express during his heydays. Isaiah grew up in the Omaha city of Nebraska with his sibling. Isaiah’s brother, Victor Simmons Jr., is also a college-level track and field athlete.

He is currently dating his long-time girlfriend, Alexus Danyelle. She completed her education at the University of Georgia. The media spotted the couple together on several different occasions. Alexus also shares their photos on her Instagram profile.

According to the recent financial reports, the current net worth of Isaiah Simmons is estimated to be around $5 million as of the 2020-21 NFL season. He signed a four-year rookie contract with the Arizona Cardinals worth $20.66 million. He also received a $12.59 million signing bonus from that contract. Simmons now earns around $3.75 million yearly salaries from his current NFL franchise.

He has earned his place in the First team All-ACC for his performance in the 2019 NFL season. Besides, he was also named as the Unanimous All-American in that same year. He also had several other individual accolades under his name. Some of the most notable awards that he received till now are as follows.