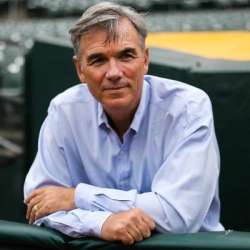 Former American baseball player William Lamar Beane III, famously known as Billy Beane, is the current executive vice president of the MLB franchise Oakland Athletics. Besides, he is also a minority stakeholder of the club. He also owns a minority stake in the EFL Championship club Barnsley FC. Billy started his career as a baseball player and stayed in the Major League from 1984 to 1989.

He played as an MLB outfielder for several teams including New York Mets, Detroit Tigers, Minnesota Twins, and Oakland Athletics. Following his active playing career, he joined the front office of Oakland Athletics in 1990 as an advanced scout. Shortly after, he became the general manager of the club in 1997. He then earned his place as the executive vice president after the 2015 MLB season.

Billy Beane Biography, Net Worth, and Many More

During his front office career with the Oakland Athletics, Billy predominantly worked in the statistical analysis sector. He implemented this technique to properly analyze the players and their performances. American author Michael Lewis wrote a book on him called ‘Moneyball’ in 2003. The movie adaptation of that book released worldwide in 2011 starring the biggest Hollywood star, Brad Pitt.

He completed his schooling at Mt. Carmel High School in San Diego. During his school days, he excelled in several popular college sports besides baseballs, such as American football and basketball. In his freshman year, he became a part of the varsity baseball team. Shortly after, he gave up playing American football after facing repeated injuries. Stanford University then offered him a joint football-baseball program scholarship.

New York Mets supposed to pick him as the first-round first overall selection during the 1980 Major League Baseball Draft. However, most of the MLB franchise thought that he would drop his MLB appearance that year to move to Stanford University. And due to that, he moved to the 23rd pick by the Mets. Shortly after, he signed a contract with the New York Mets with a signing bonus of $125,000.

He played for the Jackson Mets till 1984 before earning his promotion to MLB in 1984. Billy played five regular-season games in the 1984-85 MLB season. In the following year, he spent most of his time with the Tidewater Tides playing in the Class AAA International League. New York Mets then traded him to the Minnesota Twins for a swap deal. He played 80 games for the Twins in the 1986 MLB season.

During that time, he also played for the Toledo Mud Hens in the International League. Shortly after, he also played for the Portland Beavers in the Pacific Coast League. Minnesota Twins then traded him to the Detroit Tigers in 1988. He appeared in just six games during that season for the Tigers. Billy signed a contract with the Oakland Athletics in 1989 and played 37 games for the side. After a contract extension in 1990, Tigers sent him to play in the minor league.

He took the job of advance scout in April 1990 after Oakland Athletics assigned him to participate in the minor league. He took his retirement from playing baseball and came into the administrative section of the club. And in 1993, Billy became the assistant general manager of the Athletics. He then replaced Sandy Alderson as the general manager on 17th October 1997. After taking charge, he focused on making a cost-effective team.

Under his administration, Oakland Athletics became the only team in the American League to secure 20 consecutive victories. Right after his success, Boston Red Sox offered him $12.5 million in 2002 to become their general manager. However, Billy declined the offer and remained in the Athletics. The new owner of Athletics, Lewis Wolff, offered him a small stake in the team besides offering him a contract extension till 2012.

Sports Illustrated named him among the ‘Top 10 GMs of the Decade’ in the sports category in December 2009. He then signed a contract extension in February 2012 to remain as the GM of the Athletics till 2019. Billy took a new approach to select players and mainly started to concentrate on high school players in the MLB draft. He then earned his promotion as the executive vice president of baseball operations on 5th October 2015.

The Athletics group purchased the Major League Soccer franchise San Jose Earthquakes after Billy showed his interest in soccer. He then helped the front office of the Earthquakes to make a cost-effective team by analyzing the players. He joined the Dutch football club AZ Alkmaar in March 2016 as its advisor. Billy then became a minority stakeholder of the EFL Championship club Barnsley Football Club on 19th December 2017.

He joined the board of directors in a software company called NetSuite on 4th January 2007. Billy then served his duty as the consultant of the popular video game called MLB Front Office Manager. Michael Lewis then wrote a book on him called ‘Moneyball: The Art of Winning an Unfair Game’ in 2003. That book became a bestseller in the USA. Brad Pitt then played his role in the movie ‘Moneyball’ in 2011.

Born on 29th March 1962, Billy is a disciplined child of a military family. He grew up in the San Diego city of California while learning baseball pitching from his father, a naval officer. He completed his schooling at Mt. Carmel High School in San Diego. Shortly after completing his high school career, he visited the University of California in San Diego during his baseball offseason.

He has a daughter named Casey Beane from his first wife. Shortly after his divorce, he married Tara Beane in 199. The couple now has a twin together. They have a son named Brayden and a daughter named Tinsley. The family now lives in Oakland, California.

According to the recent financial reports of 2020, the current net worth of Billy Beane is estimated to be around $14 million. He currently draws around $1 million in salaries each year for his association with the Oakland Athletics. Besides, he also earned nearly $4 million while serving on the board of directors of NetSuite.