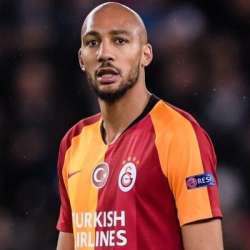 French footballer Steven Nzonzi currently plays as a defensive midfielder for the French club Rennes on a loan stint from Italian Serie A club AS Roma besides making regular appearances for the French national football team. He started his football journey with French Ligue 2 club Amiens and then joined the Premier League side Blackburn Rovers. After three years at the Ewood Park, he joined another Premier League side Stoke City in 2012. Nzonzi then moved to Spain and joined the La Liga club Sevilla in July 2015.

He created a solid buzz in the Spanish media after winning the UEFA Europa League in his debut season with Sevilla. Besides his club appearances, he also represented the French U-21 side from 2009 to 2010. Due to his impressive performance with Sevilla, he has earned his call-up for the French senior team in November 2017. Recently in July 2018, he helped France to secure their second FIFA World Cup title in Russia. Without any doubt, he established himself as one of the key players of the French squad. Besides, he has also made his name as one of the richest defenders in football.

Nzonzi started his footballing journey with the youth academy of his hometown club Racing Paris in 1998. He then joined the Academy of Paris Saint-Germain in 1999, at the age of just eleven. After three seasons at the Camp des Loges, he joined the CA Lisieux in 2002 and has spent a season with the side. The next season, he joined SM Caen followed by his move to Beauvais in 2004. Nzonzi finally joined the French Ligue 1 side Amiens SC in 2005, at the age of fifteen.

After joining the Academy of Amiens in 2005, he went through a rigorous training program for two years at the club. He also represented the reverse squad at the Championnat de France amateur 2 during that time. Finally, on 24th November 2007, he made his senior professional debut in a Coupe de France match against AS Raismes. Shortly after, he made his first start for Amiens against Bastia on 15th April 2008. He then signed his first professional contract in 2009 and has earned his permanent promotion to the club’s first squad. The same season, he has scored his first professional goal in a match against Strasbourg on 8th May 2009.

Nzonzi signed a four-year contract with Premier League Blackburn Rovers on 30th June 2009. The club has reportedly paid €720,000 transfer fee to Amiens to get him on their side. Shortly after, Nzonzi made his debut for the club against one of the Premier League champions, Manchester City, on 15th August 2009. He then scored his first goal for Rovers in an EPL match against Arsenal on 4th October 2009. The fans then voted him as the Blackburn Rovers Player of the Year on 3rd May 2010, for his brilliant performance in the 2009-10 season.

Nzonzi signed a new five-year contract extension with Blackburn Rovers in August 2010. He then received his first red card in a match against Arsenal on 2nd April 2011, for a drastic challenge on Laurent Koscielny. Shortly after, he again received another red card for violently challenging Stoke City’s Ryan Shawcross on 26th November 2011. Even after his decent performance in the 2011-12 season, Blackburn Rovers has got their relegation from the Premier League for the first time in eleven years.

Nzonzi joined his fellow Premier League side Stoke City on 31st August 2012, for a transfer fee of nearly €4 million. He then made his debut for the club against Manchester City on 15th September 2012. Surprisingly, he has received the ‘Man of the Match’ award in his debut game. Shortly after, he scored his first goal for Stoke City in a Premier League match against Tottenham Hotspur on 12th May 2013. He again produced a man-of-the-match performance for the club against West Ham United on 31st August 2013.

He played 40 matches in all competitions for Stoke City in the 2013-14 season and helped the side to finish in the 9th position of the Premier League table. In the following season of 2014-15, he played almost all matches for the club and again helped the side to secure 9th place in the table. His performance that season has also earned him the Stoke City Player of the Year award. During the three seasons that he spent with Stoke, he scored seven goals in 120 appearances.

Nzonzi signed a four-year contract with La Liga club Sevilla FC on 9th July 2015, for a transfer fee of €8.5 million. The contract also includes a €30 million buyout clause. Shortly after, he made his La Liga debut against Málaga CF on 22nd August 2015. But sadly, he has received his first red card on that same match. He then helped the club to win the UEFA Europa League final match in Basel against Liverpool on 11th May 2016. Nzonzi has received the La Liga Player of the Month award for his brilliant performance in January 2017.

Nzonzi has recently signed a four-year contract with Italian Serie A club AS Roma on 14th August 2018. The club has reportedly paid €26.65 million transfer fees to Sevilla to get him on their squad. The contract also includes an additional €4 million worth of performance-related bonuses. He made his debut for the club in a Serie A match against Atlanta on 27th August 2018. Shortly after, he made his European competitive debut for the club in the UEFA Champions League match against one of the richest football clubs, Real Madrid, on 19th September 2018.

Nzonzi has earned his first call-u for the French U-21 team on 1st October 2009, to play the European Under-21 Championship qualifications against Malta and Belgium. He made his debut for the U-21 squad against Malta on 9th October 2009. He then earned his first senior call-up on 2nd November 2017, to play friendlies against Germany and Wales. Shortly after, he made his senior international debut against Welsh on 10th November 2017. Recently, he helped his nation to secure the 2018 FIFA World Cup in Russia.

Born in La Garenne-Colombes, France, Steven Nzonzi is of mixed descent. His father has Congolese descent and his mother has French descent. Steven married his long-time girlfriend Lynda Nzonzi in 2013. Shortly after, the couple had their son, Ayden Nzonzi. But, the couple later separated followed by his wife’s accusation of hitting her in front of their child.

The current net worth of Steven Nzonzi is estimated to be around €7 million as of 2021. His market value now stands at €30 million as of the ongoing football season of 2020-21. He now gets nearly €75,000 weekly wage from his current Serie A club AS Roma. Besides his footballing income, he has also made his fortune through several of his endorsement deals.