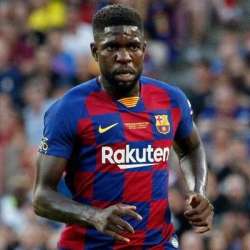 French footballer Samuel Umtiti currently plays as a center-back for the La Liga side Barcelona besides making regular appearances for the French national football team. A product of the youth academy of Lyon, he first started his professional football journey with the reserve side of Lyon in 2010. After two seasons with the B team, he made his professional debut with the first squad in 2012. Surprisingly, he helped the club to win both the Coupe de France and Trophée des Champions in his debut season.

Umtiti played 170 matches for Lyon while scoring thrice between 2012 and 2016. He then moved to Spanish club Barcelona in 2016. He again created a buzz in the media while winning the Copa del Rey in his debut season and also La Liga in his second season with Barcelona. Besides his club career, he also represented the French youth squads in several competitions. After winning the 2013 FIFA U-20 World Cup, he made his senior international debut during the 2016 UEFA Euro. Recently in 2018, he helped the French team to lift the 2018 FIFA World Cup in Russia.

Umtiti started his footballing journey with the youth academy system of his local club Menival in 1998, at the age of just five. After four seasons of basic training, he joined the Youth Academy of Lyon in 2002, at the tender age of just nine. He went through a rigorous training session at the academy till 2010 while sharpening his defensive skills. Umtiti finally has earned his chance to the reserve side of Lyon in 2010. Shortly after, he became a regular of the Lyon B team and has played 21 matches for them till 2012.

Umtiti has earned his first call-up for the Lyon senior side on 16th August 2011. He received that call-up to participate in the UEFA Champions League play-off round match against Rubin Kazan but remained as an unused substitute. The next year, he finally made his professional debut for Lyon in the Coupe de France match against Lyon-Duchère on 8th January 2012. Shortly after, he made his Ligue 1 debut for the club against Montpellier on 14th January 2012.

Umtiti signed a five-year deal with one of the richest football clubs, Barcelona FC, on 30th June 2016. The Catalan side has paid €25 million transfer fees to get him on their squad. He then made his debut for the club in the 2016 Supercopa de España ‘Second Leg’ match against Sevilla on 17th August 2016. Tragically, he suffered from a knee injury in September 2016 while training with the squad. Upon his return, he scored his first goal for Barcelona in a La Liga game against Celta de Vigo on 4th March 2017.

He created a buzz in the Spanish media after winning the 2016–17 Copa del Rey title in his debut season. He also established himself as the first choice player besides one of the best football defenders, Gerard Piqué. Umtiti again injured his right hamstring on 2nd December 2017 and had to spend eight weeks outside the ground. Upon his comeback, he helped the club to win the domestic double in the 2017-18 season. Recently on 3rd June 2018, he signed a new five-year deal with Barcelona with an improved release clause of €500 million.

Umtiti made his international debut with the French U-17 side in 2009. He then helped the U-20 side to secure the 2013 FIFA U-20 World Cup. The same year, he has earned his U-21 call-up to play in international competitions. He has then earned his first senior call-up ahead of the 2016 UEFA Euro under manager Didier Deschamps. He then made his senior international debut in the UEFA Euro quarter-final match against Iceland at the Stade de France on 3rd July 2016.

Born in Yaoundé, Cameroon, Samuel Umtiti is of pure Cameroonian descent through both of his parent’s side. He moved to Villeurbanne, France, at the age of just two with his father and his mother, Annie Ngo Um. He grew up in the district of Ménival in the 5th arrondissement of Lyon along with his brother Yannick Umtiti. Samuel Umtiti currently has a relationship with his long-time girlfriend Alexandra Dulauroy.

The current net worth of Samuel Umtiti is estimated to be around €5 million as of the ongoing football season of 2019-20. His market value now stands at €70 million as of 2019. He now gets nearly €85,000 weekly wage from his current La Liga side Barcelona. Besides his footballing income, he has also made his wealth through several of his personal endorsement deals. He is currently associated with Nike and wears Nike Magista Obra II boots since May 2018.

With Lyon, Umtiti won both the Coupe de France and Trophée des Champions in 2012. With Barcelona, he won La Liga in the 2017-18 season. Besides, he also won both the Copa del Rey and Supercopa de España twice each with the club. With the French national team, he won the 2013 FIFA U-20 World Cup and the 2018 FIFA World Cup. Besides his team performances, he also has several accolades under his name. Some of the most notable individual awards of Umtiti are as follows: