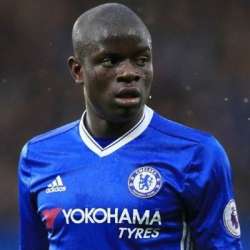 He became the only player after Eric Cantona to win the Premier League title with two different clubs in two consecutive seasons. Besides, he also received the PFA Players' Player of the Year and FWA Footballer of the Year for his performance. N'Golo also displayed his prominence for the French national team besides his club success. He made his senior international debut in 2016. Recently in July 2018, he helped the French squad to win the prestigious FIFA World Cup in Russia.

N'Golo started his footballing journey with the youth academy of his native club JS Suresnes. He joined the side in 1999, at a tender age of just eight years. He spent a decade at the academy till 2010 in the western suburbs of Paris. N'Golo went through rigorous training at the academy while sharpening his footballing skills. But due to his small stature, he has remained outside the radar of big football clubs even after having impressive skills and ball control.

JS Suresnes’s president used his personal contacts and helped N'Golo to get his first professional signing. He joined the reserve team of French tier-2 club Boulogne in 2010. He then made his professional debut with the club in a Ligue 2 match against AS Monaco on 18th May 2012. Shortly after, he scored his first professional goal against Luzenac at the Stade de la Libération on 10th August 2012. N'Golo has played almost all the third-tier Championnat National matches for Boulogne in the 2012-13 season and scored three goals.

He joined the French Ligue 2 club, Caen, in 2013 for an undisclosed transfer fee. N'Golo then scored his first goal for the club against Laval on 9th August 2013. He played all the 38 games in Ligue 2 for the club and helped them to earn the promotion to French Ligue 1. The next season, he scored his first Ligue 1 goal for Caen against Evian on 9th August 2014. Shortly after, he picked his first sent-off in a match against Rennes on 30th August 2014. He played 37 games for Caen that season and helped them to maintain their place in the Ligue 1.

Kante signed a four-year contract with one of the Premier League champions, Leicester City, on 3rd August 2015. The club has reportedly paid €8 million to get him on their side. He then made his debut for the foxes against Sunderland on 8th August 2015. Shortly after, he scored his first goal for the club against Watford on 7th November 2015. Surprisingly, N’Golo helped Leicester City to win their first-ever Premier League in the 2015-16 season.

He maintained an excellent form throughout the season and became one of the main assets in the Leicester midfield. Kante then became one of the four players of the club to be inducted into the PFA Team of the Year. He managed 175 tackles and 157 interceptions in the 2015-16 season, more than any player in the Premier League.

Kanté signed a five-year contract with one of the Premier League winners, Chelsea, on 16th July 2016. The ‘Blues’ has reportedly paid nearly €38 million to get him on their side. He received the ‘Number 7’ shirt upon his arrival at the club. Shortly after, he made his debut for Chelsea against West Ham United on 15th August 2016. He then scored his first goal for the Blues in a Premier League match against Manchester United on 23rd October 2016. L'Équipe named him the sixth-best footballer of 2016 on 26th December 2016.

N'Golo scored his first FA Cup goal for Chelsea in the quarter-final match against Manchester United at Stamford Bridge on 13th March 2017. He also received the ‘Man of the Match’ award on that occasion for his amazing gameplay. Shortly after, he again achieved his place in the PFA Team of the Year for the second time on 20th April 2017. Kante received the Premier League Player of the Season. He has also won the PFA Players' Player of the Year and FWA Footballer of the Year for the 2016-17 season. Besides, he has also earned his nomination for the FIFA Ballon d’Or in October 2017.

Kanté has earned his first call-up for the French senior squad on 17th March 2016, to play friendly matches against Netherlands and Russia. He then made his international debut against the Netherlands at the Amsterdam Arena on 25th March 2018. Kante scored his first international goal against Russia at the Stade de France on 29th March 2016. Shortly after, he made his competitive debut for France in the UEFA Euro 2016 match against Romania on 10th June 2016.

He helped France to become the runners-up at the 2016 UEFA Euro, although he remained as an unused substitute in the final match. Kante then earned his call-up for the 23-man French squad to participate in the 2018 FIFA World Cup in Russia. He helped his nation to secure the trophy while defeating Croatia at the final on 15th July 2018.

Born in Paris, France, N'Golo Kante is of Malian descent through both of his parent’s sides. Both his father and mother migrated from Mali to France in the 1980s. Sadly, his father died when he was just 11 years old. Kante grew up in a small flat in Rueil-Malmaison, Hauts-de-Seine, along with his three siblings. N'Golo Kante has got his name after the Bamana Empire king, Ngolo Diarra. Kante is a devoted Muslim and is widely regarded as one of the greatest Muslim athletes of all time. According to recent reports, his sister now plays in the youth system of Suresnes.

The current net worth of N'Golo Kante is estimated to be around €12 million as of the ongoing football season of 2020-21. His market value now stands at €80 million as of the end of 2021. He now gets nearly €135,000 weekly salary from his current Premier League club, Chelsea. Besides his footballing income, he has also made his wealth through several endorsement deals with big brands such as Adidas.

Kante won the English Premier League twice till now, with Leicester City in the 2015-16 season and with Chelsea in the 2016-17 season. Besides, he also won the FA Cup with Chelsea in the 2017-18 season. With France, he became the UEFA European Championship runner-up in 2016. And he won the 2018 FIFA World Cup in Russia. Besides his team success, he has got several accolades under his name. Some of the most prestigious awards that he received till now are as follows: