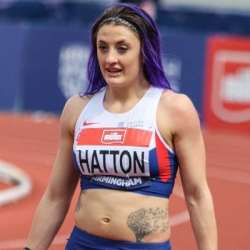 Among track and field athletes, Lucy Hatton is probably best known for competing in the hurdles. She won silver in the 60m hurdles at the 2015 European Athletics Indoor Championships. She finished third in the British all-time rankings with a time of 7.90 seconds in this event.

Hatton joined the Kettering Town Harriers club at the age of nine to begin her Athletic activities. Ultimately, she migrated to Corby, where she collaborated with Alex Clarke and John Anderson at the Corby Athletic Club.

After a back injury that led her to stop participating as a heptathlete, she planned to focus on sprint hurdles instead. Her national level triumph began in 2011 when she won hurdles titles at the English UK School Games and Schools Championships.

Lucy started running at the age of nine, joining Kettering Town Harriers. While studying criminology at the University of Leicester, she continued her student-athlete career as a hurdler.

Her senior national team debut came in 2012 when she reached the 60-meter hurdle finals at the British Indoor Championships. Next year, she was a finalist in both the indoor and outdoor competition. Hatton set a personal best of 13.62 seconds in the 100 m hurdles following that year.

Her trainer in 2014 was Jerzy Maciukiewicz, who was also the coach of European hurdles champion William Sharman. This was a period of significant improvement. Lucy set a new European record of 13.20 seconds and also finished runner-up in the British Athletics Championships.

As Hatton began her 2015 season, her improvement in the indoor 60m hurdles was impressive. At the Copernicus Cup Toru in Poland, her personal best time of 8 seconds was equaled, which she lowered to 8.06 seconds.

Later, Lucy represented Great Britain internationally, finishing with a personal best of 7.93, 7.91, and 7.90 in the final. The last improvement was good enough to bring her the silver medal behind the favorite, Alina Talay.

This also promoted Lucy to the third position on the all-time British list for the season, ahead of Tiffany Porter and Jessica Ennis.

After graduating in July 2017, Lucy was injured on her left foot, so she went through a difficult time. Following that, she had minor shoulder surgery. Despite this, she continues running after recovering.

In 2020, she joined a campaign called "wings for life". The campaign aims to help those individuals who were paralyzed as a result of accidents. Furthermore, Lucy participated in the #350challenge, which was meant to empower women in sports.

In the year 2021, she has started her new journey and started getting back to her old self.

Hatton is dating cycling coach Robert James. She has not confirmed any engagements or relationships yet. It is pretty obvious that Lucy Hatton wants to keep her personal and love life private, as most celebrities do. So, visit this page often; we'll continue to add new dating news and rumors about her.

Lucy's family's details were not revealed publicly, but Lucy posted a picture of her mother on Instagram. I think she is the only child of her parents who lives with her mom.

Not much information is available regarding Lucy Hatton's monthly salary. No official source has disclosed Lucy's income and compensation. Based on some trustworthy sources, we have been able to calculate her estimated net worth.

Since 2020, her net worth has grown significantly. Most of Lucy Hatton's revenue comes from her successful Hurdling career. A recent estimate indicates that Lucy Hatton has a net worth of more than $1 million up to $5 million. This makes her one of the wealthiest Hurdlers in the United Kingdom. Her wealth has steadily grown over the years.

Check out some exciting and undiscovered facts about Lucy Hatton:

She is a proud owner of some of the most expensive sports cars, including Audi A1 and Audi TT.

She has numerous tattoos on her body. Particularly, it includes

Her sponsor is one of the richest sports brands, Nike, which provides shoes and compression gear.

Q. Who is Lucy Hatton?

British hurdler Lucy Hatton competes at the world level in the hurdles. She won the silver medal in the 60-meter hurdles at the 2015 European Athletics Indoor Championships. She ranks third on British all-time lists with a personal best of 7.90 seconds in this event.

Q. How rich is Lucy Hatton?

Significant growth has occurred in Lucy's net worth over the past few years. She has a net worth between $1 million and $5 million.

Q. Who is Lucy Hatton's boyfriend?

Her boyfriend is cycling coach Robert James. Hatton has said she is not engaged yet. Lucy Hatton makes it pretty clear she wants to keep her personal life, and her dating life private, much like other celebrities do.

Q. When and how did Lucy Hatton become famous?

Having made the 60-meters hurdles final at the 2012 British Indoor Athletics Championships, she gained national recognition in the senior ranks. The following year's performance earned her a spot among the national finalists, both indoor and outdoor. During that year, she ran her fastest 100-meters hurdles of 13.62 seconds.

Lucy did not reveal anyone's name publicly, but she did share a picture of her mother on Instagram. She's the only child of her parents living with her mom, I believe.