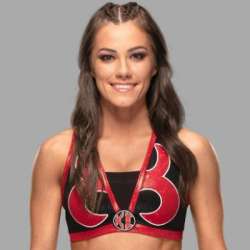 American wrestling diva Kacy Esther Catanzaro, famously known as just Kacy Catanzaro, currently signed with the NXT brand of WWE. She is also a professional gymnast and a renowned television personality. Kacy first came into prominence through her gymnastic career. However, she has earned her fame after becoming the first female ever to the finals of the popular television sports show, American Ninja Warrior.

Kacy became the first woman ever to appear in the finals of the City Finals course. After her success in the athletic sports show, she made her debut in the NXT franchise of the World Wrestling Entertainment. However, he participated in the 2018 Mae Young Classic right after her joining. Besides, Kacy also competed in the 2019 Royal Rumble match.

She started training gymnastics at the age of just six. And in 2007, she reached level 10 in gymnastics at the age of just 17. During that time, she participated in the New Jersey Level 10 State Championships in 2007. And on that tournament, she achieved the fifth place in the Senior-A division. But in the next season, she has achieved third place in that competition. In that same year, she participated in the 2008 Junior Olympic National Championships.

She started representing Towson in NCAA. And during that time, she participated in the Division I competition of the National Collegiate Athletic Association. Kacy represented the Towson Tigers team and led them to win the Eastern College Athletic Conference Championships twice consecutively in 2009 and 2010. She then received the Southeast Regional Gymnast of the Year award in 2012. And in that same year, she received the Eastern College Athletic Conference Gymnast of the Year award.

Shortly after, she co-hosted the Team Ninja Warrior College Madness in December 2016. In the following season 9 of the American Ninja Warrior, she opted for the San Antonio city qualifier. However, the qualification round didn’t go accordingly but she achieved her place in the national finals. But sadly, she failed at the very first round of the national finals thus announcing her retirement.

She opted for a tryout at the WWE Performance Center on 4th January 2017. Shortly after, WWE announced at the Mae Young Classic that Kacy signed a development contract on 27th august 2017. And on 18th January 2018, she started her training at the WWE Performance Center. Kacy then made her in-ring debut against one of the hottest WWE divas, Reina González, on 19th April 2018.

She then made her television debut against Reina at the Mae Young Classic on 12th September 2018. Shortly after, she made her main roster debut at the Royal Rumble on 27th January 2019. She then made her debut in NXT on 13th March 2019. But sadly, she announced her retirement from WWE in September 2019. Kacy reported that she took the decision due to her recurring back injury while wrestling.

She made her return to NXT as a surprise element of the Royal Rumble on 15th January 2020. She later revealed that she took the break as she was unsure about continuing her profession as a full-time wrestler. Recently in September 2020, Kacy became the No.1 contender for the NXT Women's Championship. However, one of the most popular WWE superstars, Dakota Kai, eventually eliminated her from the championship.

Born on 14th January 1990, Kacy Catanzaro is actually of Italian descent. She is the child of Andrew Catanzaro and Kathryn Catanzaro. Kacy grew up in the Belleville area in New Jersey along with her two sisters, Cheryl Catanzaro and Jessica Catanzaro. After completing her high school education, she took admission to Towson University in Maryland.

Kacy remained in the Towson University from 2009 and 2012. After completing her college education, she started a romantic relationship with her ex-boyfriend Brent Steffensen. She then also had a brief relationship stint with Ricochet.

According to the recent financial reports, the current net worth of Kacy Catanzaro is estimated to be around $500k as of 2021. Besides having her net worth of nearly half a million, Kacy also now earns around $100k salary for her association with the NXT brand of WWE. Moreover, she also has several sponsorship deals with reputed companies.

Q. Who is Kacy Catanzaro?

Kacy Catanzaro is an American professional wrestler currently signed under the NXT franchise of WWE. However, she is also an avid gymnast and competed in NCAA championships. Besides, she also achieved her fame during her participation in American Ninja Warriors.

Although she resigned from WWE due to her recurring back injury in September 2019, Kacy made a comeback in the 15th January 2020 episode of women's battle royal in WWE. And since then, she competes in the NXT on a regular basis. While talking about her retirement, Kacy later revealed that she took that break to be sure about continuing her wrestling career.

Q. Who is Kacy Catanzaro's boyfriend?

Kacy Catanzaro previously dated stuntman and contender of ANW, Brent Steffensen, since 2013. They were known as a royal couple of American Ninja Warrior during their time with the show. However, they got separated after that. Kacy also reported having a relationship with Ricochet.

Q. How much does Kacy Catanzaro make?

Kacy currently earns around $100k yearly salary for her association with the NXT brand of the World Wrestling Entertainment. However, she now has a net worth of nearly $500k. Her net worth is expected to increase a lot in the course of the next few years.