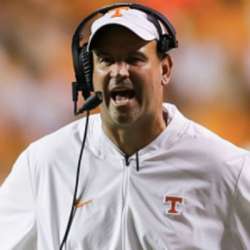 American football coach Jeremy Pruitt currently serves as the senior defensive assistant for the NFL side, New York Giants. He previously coached the Tennessee Volunteers football team of the University of Tennessee. He also previously served as a defensive coordinator for several college football teams including Alabama Crimson Tide, Georgia Bulldogs, and Florida State Seminoles. As a defensive coordinator, his performances consistently performed among the top ten in the United States.

During his time with Hoover High School in 2006, he appeared in a popular TV series called Two-A-Days. He received his nomination for the Broyles Award for his performance in 2013.

Jeremy played high-school football for Plainview high school. During that time, he helped his school to achieve a 48-8 record. Besides, he has also earned his place in the all-state first team twice consecutively in 1992 and 1993.

He then joined the Middle Tennessee State University and started playing as a defensive back throughout his freshman year. He then took his transfer to the University of Alabama in his sophomore year.

Jeremy appeared in nine games in his junior year under coach Gene Stallings. And in his senior year, he helped Alabama to win the 1996 Outback Bowl. He became a part of the complex football scheme developed by Bill Oliver.

Under his guidance, he spent a brilliant season in his final year at the university and helped the team to have a wonderful winning record.

He joined Alabama Crimson Tide under then-coach Curley Hallman as a student assistant in 1997. However, he then moved to high school football and started coaching at the Plainview High School in 1998. He took his transfer to Fort Payne in 2001.

Jeremy then joined the Hoover High School and served as the assistant coach from 2004 to 2006. During that time, he appeared in an MTV show called Two-A-Days.

He joined the Alabama Crimson Tide again as the Director of Player Development in 2007. And in 2010, he has earned his promotion and became the defensive back coach.

Under his guidance, three of the best linebackers in the NFL, Mark Barron, DeQuan Menzie, and Dre Kirkpatrick became all-Americans. And in 2013, he took his transfer and joined the Florida State Seminoles as the defensive coordinator.

He helped the Seminoles to become the national champion in 2013. Jeremy then took his transfer to the Georgia Bulldogs and started working as a defensive coordinator since 2014.

His 2015 season at Georgia achieved the seventh position in the United States. He then rejoined the Alabama Crimson Tide again as the defensive coordinator in 2016. Jeremy then helped the Alabama team to win the National Championship in 2017.

He joined the University of Tennessee as their head coach in December 2017. His decision came after the team fired Butch Jones. Shortly after, Jeremy made his debut at the team in a game against the West Virginia Mountaineers on 1st September 2018.

He then recorded his first victory in a game against East Tennessee State University at the Neyland Stadium on 8th September 2018. He finished his first season with a 5-7 overall record.

The team then achieved their first win in the 2019 college football season against their in-state rival University of Tennessee at Chattanooga.

They then had a five-game winning streak under the guidance of Jeremy and achieved their place in the bowl. He then secured his first bowl victory in a game against the Indiana Hoosiers at the 2020 Gator Bowl.

Born on 28th May 1974, Jeremy Pruitt is the first child of Dale Pruitt and Melissa Pruitt. His father, Dale, is a high school football coached and guided several high school teams including Plainview, Pisgah, Ft. Payne, Albertville, and Dade County.

He is currently coaching the American football team of the Marion County High School. Jeremy both played and coached under his dad.

Jeremy grew up in the Rainsville area of Alabama along with his younger brother Luke Pruitt. After a brief romantic relationship, Jeremy married Casey East. The couple now has three children together named Jayse Pruitt, Ridge Pruitt, and Flynt Pruitt.

According to the recent financial reports, the current net worth of Jeremy Pruitt is estimated to be around $5 million as of the 2021-22 college football season.

He now earns around $3.9 million yearly salary for his head coaching job at the University of Tennessee. Besides, he also earns from several sponsorship deals and public appearances.

Q. Who is Jeremy Pruitt?

Jeremy Pruitt is an American football coach currently working as the head coach of the Tennessee Volunteers football team at the University of Tennessee. He also served as the defensive coordinator for several college teams including Alabama Crimson Tide, Georgia Bulldogs, and Florida State Seminoles.

Q. Where did Jeremy Pruitt coach?

Q. What is the salary of Jeremy Pruitt?

Jeremy Pruitt currently earns a $3.9 million annual salary for his head coaching job at the Tennessee Volunteers football team of the University of Tennessee. He recently created a solid buss in the media while becoming the highest-paid state employee in Tennessee.

Q. Who is Jeremy Pruitt married to?

The media started reported a romantic relationship between Jeremy Pruitt and Casey East in 2013. And in 2014, the couple got married. They now have three sons together named Jayse Pruitt, Ridge Pruitt, and Flynt Pruitt.