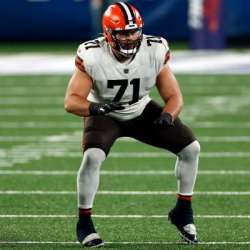 American football player Jedrick Wills Jr., famously known as just Jedrick Wills, currently plays as an offensive tackle for the National Football League franchise Cleveland Browns. Since his college football days, he showed his American football prowess and caught the attention of several NFL sides and coaches alike. And after he made his debut in the NFL in 2020, he started getting regarded as one of the best players in recent days.

Wills played college football for the Alabama Crimson Tide football team of the prestigious University of Alabama. And, he earned his reputation while playing for the college team. He helped the side to win numerous matches at the college level and established the team as one of the best in the USA. Since then, several football pundits marked him as one of the best NFL offensive tackles the tournament has ever seen.

He showed interest in American football right after joining his native Lafayette High School in Kentucky. Shortly after, Associated Press named him in the first team All-State when he was just a junior. Jedrick then earned his invitation to play in the Under Armour All-America Game, the all-star game of the American high school. He first came into prominence after achieving this feat.

Jared shortly became one of the best players in his school and helped the side to win numerous matches against the fellow high schools. Several football pundits then rated him as the top college football prospect in Kentucky. He received several offers from top colleges including Notre Dame, Kentucky, Tennessee, and Michigan. However, he finally announced his commitment to Alabama.

During his freshman year, he participated in 11 regular-season games for the Crimson Tide. In that same year, he started for the first time against Ole Miss Rebels. And in his sophomore year, he started playing as a right tackle and started in all the 15 regular-season games for the team. For his performance in Week 7 against the Missouri team, he received the Offensive Lineman of the Week award in the Southeastern Conference.

Associated Press named him as the second-team preseason and the first team midseason. Besides, Athlon Sports named him in the first-team preseason All-American. Other media houses like Sports Illustrated, Sporting News, and USA Today also named him among the all-American teams. In his junior year, he achieved a total of 771 snaps but missed just seven blocks. However, he announced in January 2020 that he would forgo his senior year to appear in the 2020 NFL Draft.

One of the most successful NFL teams, Cleveland Browns selected him as the first round 10th overall pick in the 2020 NFL Draft. Shortly after, he made his debut against the Baltimore Ravens. However, he suffered a minor shin injury during that game. In the match against Houston Texans, he helped the side to achieve 231 rushing yards with a touchdown. And for that, he received the Pepsi NFL Rookie of the Week award.

Born on 17th May 1999, Jedrick Wills is the first child of his father, Jedrick Wills Sr., and his mother, Sivi Wills. His father is an assistant coach in women’s basketball. And his mother was a very successful basketball player for Eastern Kentucky during her heydays. Irrespective of several rumors of his romantic life, there is no confirm news about his recent relationship.

According to the recent financial reports, the current net worth of Jedrick Wills is estimated to be around $5 million as of the 2020-21 NFL season. He signed a $19.7 million rookie contract with Cleveland Browns in 2020 for four seasons. Jedrick currently gets around $610k base yearly salary with a $2.9 million prorated bonus from his national football league contract.

Since his high school career, he helped his side to win several tough matches against reputed opponents. And, he continued his brilliant performance even in college football. Besides, he also delivered great performances in the debut season of his NFL career. He now has several individual awards under his name. Some of the most notable among those are as follows.