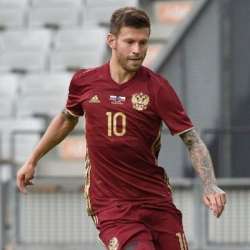 He won the Footballer of the Year award in 2015-16. Besides, he was the top goal scorer in the Russian Premier League in 2016-17. Moreover, He likes to play shooting games like counter-strike.

Fyodor Smolov Biography, Net Worth, and Other Interesting Facts

Fyodor Smolov graduated from the Master-Saturn Yegoryevsk football academy. During his teenage, he developed a love of football and aspired to become one of the greatest footballers.

On April 28, 2007, Fyodor made his debut playing for FC Luch-Energiya Vladivostok. He was 17 and joined Dynamo as a substitute for Cicero in the Russian Premier League.

He played prolifically for the national junior teams and Dynamo's Under-21 team. However, he could score one goal for the senior team over the next 3.5 years.

On July 14, 2010, the club announced that Smolov would join Feyenoord on a 1-year loan deal. Fyodor returned from loan to a squad player position on 2011–12. Despite this, he was only an alternate player after nine matchdays.

Consequently, Anzhi Makhachkala loaned him again for the entire 2012-2013 season. Later for the second half of the 2013-2014 season. During this time, he played with players like Willian, Lassana Diarra, and Samuel Eto'o.

Ural Yekaterinburg Club signed Smolov on a season-long loan deal on September 1, 2014. He scored his 1st goal in the 1–2 away loss to Amkar Perm two weeks later on his new club debut. With eight goals and two assists in 22 league appearances, he played a major part in Ural's season.

The Russian Premier League club Krasnodar signed a four-year contract with Smolov as a free agent on June 2, 2015. On July 20, 2015, in his first competitive match for his new club, he won his debut match against Amkar Perm 1–0 in a league match. In a 3–3 draw with Slovan Bratislava in the third qualifying round of the UEFA Europa League on August 6, he scored his first goal.

On April 10, 2016, Krasnodar breezed won from Ural Yekaterinburg by 6–0, thanks to four goals from Smolov. In the 2015–16 Russian Premier League season, he scored 20 goals in 29 matches, making him the top scorer and becoming the first Krasnodar player to achieve this.

He scored his first goal on February 16, 2020, for his new club at Santiago Bernabéu Stadium in a 2–2 draw against one of the richest football clubs, Real Madrid. Smolov's second goal of the season came on June 27 during a 2–2 draw with Barcelona.

Smolov played in the qualifying play-off matches against the Czech Republic in the next cycle. He scored three goals, helping the U21 team qualify for the 2013 UEFA European Under-21 Football Championship.

Russian manager Fabio Capello invited Smolov into the squad on November 6, 2012, to face the United States. On November 14, he made his national team debut and got his first goal, resulting in the tie-game by 2–2.

In a 7–0 Euro 2016 qualifier against Liechtenstein on September 8, 2015, Smolov scored his first competitive goal for the national team. His French national team selection enabled him to participate in all three matches in France's final competition. The national team finished fourth in group B.

Russian defender Smolov scored the second goal in Russia's 2–0 win against New Zealand at the 2017 FIFA Confederations Cup at Krestovsky Stadium. In a World Cup squad announced on June 3, 2018, his name was in the finalized squad.

Smolov played against Saudi Arabia in the tournament-opener, where he served as a sub in every game after that. Fyodor's penalty kick in the Round of 16 gave Russia a shock victory over Spain. Later, Danijel Subai, who helped Croatia defeat Russia, saved his shot in the quarterfinal shootout.

Since 2012, he has had an intimate relationship with a Russian TV hostess and model named Victoria Lopyreva. In December 2013, this couple married, but unfortunately, they separated in May 2015. Victoria told the reason behind their divorce.

She stated that he had not yet achieved the maturity required for family life. He was more interested in social networks, video games, and cars. After that, Fyodor dated a model named Miranda Shelia. However, they ended their relationship shortly after Euro Cup 2016.

Presently he is dating his fiancé Marie Yumasheva, the granddaughter of Russian President Boris Yeltsin. She is so special to him.

During this epidemic, he was in Paris, but he traveled to Russia to celebrate her 18th birthday by defying Spain's pandemic protocols.

They include three members in total. Mikhail Smolov is the father of Fyodor Smolov, while Irina Smolova is his mother. Additional information about his family is not publicly available.

From his football career, Fyodor Smolov has acquired a tremendous amount of money. His net worth has grown significantly over the last few years. Based on current estimates, his net worth stands at $22M.

He owned several cars, including BMWs, in his car collection.

Many inks cover Fyodor's body; some are religious, while others are dedicated to his ideals and beliefs. Most prominent is an ink tattoo on Smolov's right arm that reads Mikhail, the name of his father.

He has inked the year of his birth on the center of his chest. FAITH is inscribed in Graffiti style across the chest of Fyodor. Saratov City is Fyodor's birthplace, so it is inked on his right pec. His right forearm is tattooed with an angel with wings.

The tattoo on Fyodor's right arm is a Flying Dove with sun rays, while Geometrical Tiger is on his right thigh. A cross with Jesus Christ tattooed on Fyodor's right forearm, while another on the side of his left shoulder.

Smolov can fluently speak English. He loves reading books and has all the Mario Puzo novels in the original language. A longtime AC Milan fan, he once named Andriy Shevchenko and George Weah among his childhood favorites.

Smolov hit a traffic barrier with his BMW M5 on August 1, 2018, in Krasnodar. Yet his life was saved during this accident. In addition to being fined, he was also suspended from driving for a year for leaving the scene of an accident.

More than football, he has been in the news for his relationship model and his ex-wife Victoria. Russian rapper Pharaoh has collaborated with him on a song. He enjoys playing shooting games.

Q. Who is Fyodor Smolov?


Q. How rich is Fyodor Smolov?

Q. When is Fyodor Smolov's birthday?

Q. When and how did Fyodor Smolov become famous?

He won the Russian Premier League scoring title in 2016-17 and was voted the Footballer of the Year in 2015-16. As a result, he became successful and received a chance to play in the Russian National Football Team.

Q. How tall is Fyodor Smolov?

Q. Who is Fyodor Smolov's girlfriend?

His intimate relationship with Russian TV hostess and model Victoria Lopyreva began in 2012. In May 2015, a couple divorced after being married in December 2013. Victoria explained the reasons behind their divorce. She commented that he lacked the maturity required for family life. He was more interested in playing video games, using social networks, and driving cars. Later, Fyodor dated another model named Miranda Shelia, but they ended their relationship shortly after the Euro Cup in 2016. Currently, he is dating his fiancé Marie Yumasheva, the granddaughter of Russian President Boris Yeltsin. Her presence in his life is so deep and meaningful to him.

They are a total of three family members. Mikhail Smolov is the father of Fyodor Smolov, whereas Irina Smolova is his mother. Additional information about his family is not publicly available.