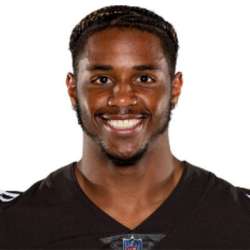 American football player Donovan Peoples-Jones, famously known as just DPJ, currently plays for the National Football League franchise Cleveland Browns. He mainly plays as a wide receiver, although he can be also deployed as a kick returner. Donovan played college football for the Michigan Wolverines men’s basketball team of the prestigious University of Michigan. And since that time, he is known as one of the best football prospects to football pundits and analysts alike.

Known as one of the best NFL Wide Receivers of this era, Donovan showed excellent footballing talent since his childhood days. And during his high school career, he started to get media attention for his brilliant prowess in American Football. Shortly after he made his debut in the college league, he became one of the top future prospects for all the NFL franchises.

He joined the Cass Technical High School and started playing American Football. Shortly after, he became a five-star recruit due to his sports talent. After one of the most handsome NFL players Charles Rogers in 2000, he became the best wide receiver recruit from the Michigan State. In a televised press conference on ESPN2 on 15th December 2016, he expressed his playing commitment towards the University of Michigan.

As a Punt returner, Donovan started against Florida as a true freshman on 2nd September 2017. He returned five punts that also include an 18-yard return with 40 yards in total. In his second game against Cincinnati, he ran 44 yards. He made an unbelievable 79-yard return for a touchdown in his third match against the Air Force Falcons. Donovan was named as the Freshman All-American by both the 247 Sports and Football Writers Association of America.

He also received Michigan's Rookie of the Year award. In the very next season, he scored 7 touchdowns and 39 receptions with a total of 541 yards. For his performance that season, he has achieved his place in both the All-Big Ten offensive third team and All-Big Ten special third team. Media also named him as the honorable mention in the All-Big Ten offensive team. However, he foregoes his final season’s eligibility to appear in the 2020 NFL Draft.

One of the most successful NFL teams, Cleveland Browns, selected Donovan as the sixth round 187th overall pick during the 2020 NFL Draft. Shortly after, he signed a rookie contract with the Browns on 20th May 2020. He scored the match-winning touchdown along with three passes for 56 yards in total against the Cincinnati Bengals on 25th October 2020.

Born on 19th February 1999, Donovan Peoples-Jones was born in Detroit, Michigan, United States. He is the first child of his father, Eddie Jones, and his mother, Roslyn Peoples. Donovan spent his childhood in Midtown Detroit while having his school education in Cass Technical High School. As of now, he doesn’t have any confirmed relationship commitments.

According to the recent financial reports, the current net worth of Donovan Peoples-Jones is estimated to be around $1 million. He currently gets around $610k yearly salary from his current NFL side Cleveland Browns. However, he signed a contract worth $3.48 million till 2023 with the Browns. Besides his footballing income, Donovan also earns from his sponsorship deals and public appearances.

He has achieved his place in the All-Big Ten Third-team twice consecutively, in 2018 and again in 2019. Besides, Donovan has several accolades under his name. Some of the most notable awards that he has already received till now are as follows.