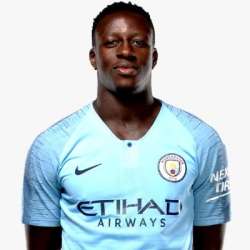 French footballer Benjamin Mendy currently plays as a Left Back for the English Premier League club Manchester City besides making regular appearances for the France national football team. A graduate of the Le Havre’s youth academy, he started his football career while playing for the reserve side of the club in 2010. He made his senior professional debut with the club in 2011 and then eventually moved to French Ligue 1 side Marseille in 2013.

Mendy joined fellow Ligue 1 side AS Monaco in 2016 after spending three seasons with Marseille. Finally, in the summer of 2017, he joined one of the Premier League winners, Manchester City. Besides his active career, he also made his prominence in the international circuit. After his brief appearances for the French U-16 to U-21 teams, he made his senior debut in 2017. Recently in July 2018, he helped Les Bleus to achieve their second-ever FIFA World Cup trophy.

Mendy started his footballing journey with the youth academy system of his local club Palaiseau in 2000, at the age of just six. After seven seasons of rigorous training at the club, he opted for the youth academy system of Ligue 2 club Le Havre. He has spent four seasons at the Academy of Le Havre while sharpening his defensive skills. During that time, he has made several appearances for the club’s youth squads. At the end of the 2010-11 season, he has attracted the attention of club officials due to his impeccable skills.

Mendy then signed his first professional three-year contract with Le Havre on 24th July 2011. Shortly after, he made his professional debut for the first team in the Coupe de la Ligue second-round match against Amiens on 9th August 2011. The following season, he became a regular starter at the first squad of the club and delivered an impressive performance. He has made 57 total competitive appearances for the Le Havre first team between 2011 and 2013.

Mendy joined fellow Ligue 1 side Olympique de Marseille on 8th July 2013. Shortly after, he made his Ligue 1 debut for the club against Guingamp on 11th August 2013. He then scored his first goal for Marseille against Saint-Étienne on 24th September 2013. He made his UEFA Champions League debut in a group stage match against Borussia Dortmund on 1st October 2013. Due to his impressive performance, he has earned his place in the 40-man shortlist for the Golden Boy award in 2014.

Mendy made 33 starts for the club in Ligue 1 and provided six assists during the 2014-15 season. Besides, he also helped the side to achieve the UEFA Europa League qualification that season. He then received his first straight red card in a match against Toulouse on 23rd September 2015. In the five seasons that he spent with Marseille, he has made 101 competitive appearances and provided 14 assists.

Mendy signed a five-year contract with fellow Ligue 1 side AS Monaco on 22nd June 2016. He then made his debut for the club in the UEFA Champions League third-round match against Turkish club Fenerbahçe on 27th July 2016. Five months later, he received his first red card in a Ligue 1 match against Lyon on 18th December 2016. He then scored his first goal for Monaco in the Coupe de France match against Marseille on 1st March 2017. He also earned praises from football pundits after providing four assists in the 2016-17 season.

Mendy made 24 league appearances for Monaco in the 2016-17 season and created a marvelous defensive line partnership with Djibril Sidibe. He has then earned his place in the 2017 UNFP Team of the Year on 16th May 2017. Mendy then played his final game for Monaco against Saint-Étienne on 17th May 2017. Monaco relieved several great footballers that also includes Kylian Mbappé and Tiemoué Bakayoko.

Mendy signed a five-year contract with one of the Premier League champions, Manchester City, on 24th July 2017. The club has reportedly paid a €58 million transfer fee to Monaco to get him on their side. Tragically, he suffered an anterior cruciate ligament injury in a match against Crystal Palace on 23rd September 2017. He then made his return in a League match against Swansea City at the City of Manchester Stadium on 22nd April 2018.

Mendy made his international debut with the French U-16 side in 2009. He then helped the U-17 squad to reach the FIFA U-17 World Cup quarter-finals in 2011. He then made several appearances for U-18, U-19, and the U-21 side between 2011 and 2016. Mendy has earned his first senior call-up in March 2017. Shortly after, he made his international debut in the 2018 FIFA World Cup qualification match against Luxembourg on 25th March 2017. He then became an integral part of the French squad that won the 2018 FIFA World Cup in Russia.

Born in Longjumeau, France, Mendy is of Cote d’Ivoire descent through his parent’s side. He grew up in the southern suburb of Paris under the guidance of his father, Mendy Sr., and his mother, Monique Mendy. Often referred to as ‘Ben’, Mendy is a semi-professional dressing room DJ for his clubs and is a big fan of music.

The current net worth of Benjamin Mendy is estimated to be around €4 million as of the ongoing football season of 2020-21. His market value now stands at €40 million as of 2021. He now gets nearly €90,000 weekly salary from his current Premier League side Manchester City. Besides his professional earnings, he also made his wealth through several of his sponsorship deals. He is currently associated with Adidas and wears their Adidas X 18.1 boots.

With AS Monaco, he won the French Ligue 1 title in the 2016-17 season. With Manchester United, he won both the Premier League and the FA Community Shield in the 2017-18 season. And with the French national team, he recently won the 2018 FIFA World Cup in Russia. For his impressive performance, he has also received his place in the UNFP Ligue 1 Team of the Year in the 2016–17 season.