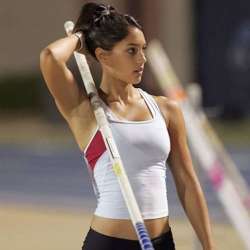 American pole vaulter Allison Rebecca Stokke Fowler, also known as just Allison Stokke, is one of the most popular fitness models in the world. During her high school days, she broke numerous American records of pole vault. Even after completing her school days, she continued to play the sport while attending the University of California. She then moved to Barkley University and started to participate or their California Golden Bears track team.

Stokke also participated in competitive segments of pole vaulting. She took part in NCAA Division I Championships twice and achieved the All-American honors. Due to her performance in the 2011 NCAA Indoor Championships, she bagged all-academic honors at the regional level due to her prominence in both academic performance and sports performance. After finishing college, she also opted for the trials of the Olympic team.

Allison opted for the United States Olympic Trials in 2012 for the pole vault team. But despite her good performance, she failed to make it to the final list. Since 2017, she continued to pole vault in the national circuit. At the age of 17, a picture of her went viral on the internet and made her an internet sensation within a week. She received a glamor model status despite her great performance in sports. This incident created a huge debate about sportswomen.

Stokke first tried her hands on gymnastics during her childhood days. But while attending Newport Harbor High School, she shifted her interest from gymnastic to pole vaulting. And in no time, she became the best pole vaulter of her school. And by the age of 14, she became one of the best pole vaulting prospects of the United States. She won the gold medal with a record height of 12 feet 6 inches (3.81 meters) in the 2004 United States Championship.

In that same year, she surpassed the long-standing high school record with her 12 feet 7 3/4 inches vault as a freshman. She then again surpassed the sophomore record with her unbelievable vault of 13 feet 5 3/4 inches in the following year. It was a record for the 15-year age group in pole vaulting. Shortly after, she broke her leg while practicing. Despite that, she achieved the gold at the CIF California State Meet twice.

During her senior year, she achieved second place in the national high school rankings as she created her new record of 13 feet 6 3/4 inches. Besides, she also achieved eighth place in the national junior championships in that same year. Stokke then achieved a scholarship at the University of California to study sociology. She then quickly became a part of the California Golden Bears track team and broke the school record with her 13 feet 5 3/4 inches vault.

In the 2011 season, Stokke took part in the regional meets of the MPSF (Mountain Pacific Sports Federation). That same year, she also competed in the Pac-10 Conference. She has touched a new height of success in her second year in college as she made a new record of 13 feet 9 1/2 inches. Five-time All-American at UCLA and Cal coach, Scott Slover, started guiding her. After achieving eighth place in the Pac-10 Championships, she made her debut in the NCAA Women's Division I Outdoor Track and Field Championships.

That same year, she missed the NCAA Championships by just two ranks. She then again achieved eighth place in the NCAA Indoor Championships while making a new record of 13 feet 5 ¼ inches in her first attempt. And with that feat, she received the All-American status. After completing college, she continued to participate in the pole vault but failed to make any significant impact.

Stokke started practicing for the trials of the 2012 London Olympics after leaving college. And in that same year, she created her career’s best record of 14 feet 3 1/2 inches. But in the 2012 United States Olympic Trials, she failed to perform well. She is the only participant that failed to cross the opening mark of 13 feet 11 1/4 inches. Her performance then declined in the next two years as she came down from 4.2 meters in 2013 to 3.95 meters in 2014.

She achieved third place in the National Pole Vault Summit in 2015 with a vault of 13 feet 7 1/4 inches. In the following year, she reached a height of 4.15 meters at the 2016 Chula Vista OTC High-Performance Meet. And in 2017, she touched a height of 4.27 meters in the Austin Longhorn Invitational meet. However, her performance faced a rapid decline after that.

A photojournalist of the Californian track and field website took a picture of Allison Stokke when she was competing in New York during the 2007 Meet. A sports blog called ‘Leather’ then reposted that photo online with the heading ‘Pole Vaulting is Sexy, Barely Legal’. That blog has a huge male fan base that instantly admires the attractive photo of 17-year-old Allison Stokke pole vaulting.

Within a few weeks, that photo went viral all over the internet and created a solid buzz. Shortly after that photo attracted the attention of millions, the photographer who actually took the photo threatened to sue the owner of Leather, Matt Ufford. But, it was quite late as several dozens of websites already reposted that photo in their own articles.

Shortly after Stokke became a new internet sensation, a tribute website emerged on the public platform consisting of several of her pole vaulting images. And soon, a fan group was created consisting of thousands of her avid followers. All of her fans started posting her photos on several social media platforms. And in no time, she went viral in the internet world. That huge surge in popularity instantly catches the attention of national and global newspapers.

Within a few weeks, several giant media houses such as The Washington Post, The New York Times, and the Los Angeles Times started commenting on her internet fame. Besides, the BBC also addressed this phenomenon. Other global media houses like Australia-based The Sydney Morning Herald and Germany-based Der Spiegel also covered her. Stokke also touched a million search engine results too. CBS also covered her story during that time.

After the widespread remarks and international debate about her becoming a viral beauty idol despite being a great athlete, Allison Stokke herself tried to control the situation. She received thousands of photoshoot requests and soon hired a media consultant to handle her fame. During that time, she also gave an interview regarding various pole vaulting techniques. And, that video achieved thousands of views on YouTube in no time.

Her father who is also a lawyer by profession started to address the illegal behavior of her fans stalking her. In an interview with the Los Angeles Times, Stokke herself told that she never entertain those unnecessary attentions. Brett Hutchins and David Rowe talked about the case of Allison Stokke in their new book ‘Technology, Power, and Culture in the Network Society’. They also compared her with the most beautiful soccer players, Hope Solo and Alex Morgan.

Following her successful college career in pole vaulting, she also started working as a sportswear model. She appeared in ad campaigns for companies such as Nike and Athleta in 2015. And in the following year, she started modeling for Uniqlo. She then started working with GoPro. The video where a GoPro camera was attached to her pole to show her technique reached millions of views on YouTube in 2016.

Both her father, Allan Stokke, and her mother, Cindy Stokke encouraged her to peruse a career in sports since she was a kid. Allison belongs to a sporting family and grew up in the Newport Beach area in California. Her brother, David Stokke, is also a great athlete and a national level youth gymnast. Allison attended Newport Harbor High School where she first started practicing pole vaulting.

Following her modeling career with industry leaders, Stokke started dating one of the best golfers in the world, Rickie Fowler, in 2017. They announced their engagement in June 2018. And in October 2019, the couple got married at a beach wedding. Their wedding photo of Allison in a classic white bridal gown and Rickie in a blue suit went viral on the internet in no time.

According to the recent reports of 2020, the current net worth of Allison Stokke is estimated to be around $500k. Besides her active career as a pole vaulter, she has also earned quite a good amount of money as a sports model. She worked with companies such as Nike and Uniqlo that significantly contributed to her overall net worth.

So, here are all the interesting facts about the American pole vaulter and sportswear model Allison Stokke. We hope that you liked this biographical article. And, don’t forget to send us your valuable opinion in the comment box below.

Q. Who is Allison Stokke?

Allison Stokke is an American track and field athlete who participates in the pole vault. She had immense success in this sport as a high school and college athletes. Besides, she also now works as a sportswear model. Back in 2007, some of her images went viral on the internet.

Q. How old is Allison Stokke?

Born on 22nd March 1989, Allison Stokke is currently 31 years old as of 2020. She was born in California, United States. She also spent her entire childhood and professional career in the Newport Beach area of California.

Q. How tall is Allison Stokke?

While most of the athletes who participate in track and field events are taller than average people, Allison Stokke is even taller. As of 2020, she is 5 feet 7 inches tall with a bodyweight of 58kgs. And, that body stats depict her athletic built.

Q. Allison Stokke where is she now?

Following her career in the pole vault, Allison Stokke started working as a sportswear model for reputed brands such as Nike and GoPro. And in October 2019, she tied the knot with American golfer Rickie Fowler in a beach wedding.