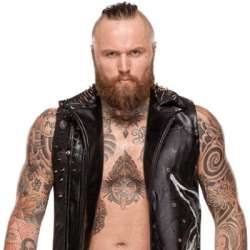 Dutch professional wrestle Tom Budgen, famously known by his ring name Aleister Black, currently performs in World Wrestling Entertainment (WWE). He mainly appears in the Raw brand of WWE. Before coming to America, he previously performed under the ring name Tommy End in Europe and Japan. He appeared in several independent wrestling promotions and held numerous titles throughout his career.

Following his career in independent wrestling promotions, he joined WWE’s development territory, NXT, in April 2017. Shortly after, he made his grand debut during the NXT TakeOver in Orlando. He won the NXT Championship at the NXT TakeOver: New Orleans in April 2018. Black then made his WWE debut in SmackDown in April 2019. However, he moved to the Raw segment in October 2019.

Black signed his first contract with WWE in June 2016. Shortly after, he reported to the WWE Performance Center on 19th October that year. He then adopted his new ring name ‘Aleister Black’ on 7th January 2017. Black made his debut in a surprise appearance at the United Kingdom Championship Tournament finals against Neville on 15th January 2017. However, he lost that non-tournament match.

NXT aired several of his vignettes on the 8th March episode that almost locked the upcoming debut of Black. Shortly after, he made his television debut in the ‘NXT TakeOver: Orlando’ event at the Andrade "Cien" Almas on 1st Aprils 2017. However, he earned his first big win against Hideo Itami at the ‘NXT TakeOver: Brooklyn III’ event a little later. And since then, he started to appear quite frequently in NXT.

He started his new on-screen feud with the ‘Velveteen Dream’ and defeated him in the ‘NXT TakeOver: WarGames’ event. And that defeat, Dream discontinued his feud with Black. Shortly after, he participated in a fatal-four way match on the 27th December episode of NXT. He then defeated Adam Cole in an Extreme Rules match at the ‘NXT TakeOver: Philadelphia’ event on 27th January 2018.

Black participated in the NXT Championship at the ‘NXT TakeOver: New Orleans’ event on 7th April 2018. And on that match, he defeated Andrade "Cien" Almas to win the NXT title. He then faced Lars Sullivan on the 30th May episode of NXT who challenged him for the championship title. Black defeated Lars in the ‘NXT TakeOver: Chicago II’ event to successfully defend his title. However, he lost his title to Tommaso Ciampa on 25th July 2018.

According to the storyline, he was attacked by an unknown assailant and was later found unconscious in the parking lot of the NXT arena. He was soon rushed to the nearby medical facility. NXT later announced that Black would not appear in the ‘NXT TakeOver: Brooklyn’ event. He made his comeback on the 17th October episode where one of the hottest WWE Divas, Nikki Cross, revealed that Johnny Gargano attached Black.

Black then defeated Johnny Gargano in the ‘NXT TakeOver: WarGames’ event. He then made his entry in the Royal Rumble as the 21st participant on 27th January 2019. However, he faced elimination from Baron Corbin in that match. Black along with his tag-team partner Ricochet faced The War Raiders in the NXT Tag Team Championship at the ‘NXT TakeOver: New York’ event on 5th April 2019.

Black made his main WWE roster debut in a match against Elias on 18th February 2019. He then formed his tag-team with Ricochet and competed in the Raw Tag Team Championship but failed. They moved to SmackDown Tag Team Championship and competed in the WrestleMania 35 event but again remained unsuccessful. Raw then drafted him as a part of their Superstar Shake-up on 15th April 2019.

However, he moved to the SmackDown brand after his wife Zelina Vega joined SmackDown on 22nd April 2019. He made his debut in his very first PPV match at Extreme Rules against Cesaro on 14th July 2019. He achieved a marvelous win in that match. Shortly after, he again drafted back to the Raw segment of WWE as a part of the 2019 WWE draft. Black then faced Buddy Murphy in a ‘TLC: Tables, Ladders & Chairs’ match and won.

He entered Royal Rumble, his very first PPV Royal Rumble event, on 26th January 2020 as the 28th Contestant. However, Seth Rollins eliminated him in that match. Black then faced one of the most popular WWE wrestlers AJ Styles in an Elimination Chamber on 8th March 2020. He won that match with interference from The Undertaker. Black defeated Bobby Lashley in the WrestleMania 36 event.

Born on 19th May 1985, Black has quite a troubled childhood. He grew up in Amsterdam, the capital of the Netherlands, in a very poor family. His father follows a cult-like religion back in those days. Black also credited his occult-like in-ring persona heavily influenced by his father’s character following that dark religion. Black has Claustrophobia and credits spiders as his biggest fears. During his childhood days, he attended Davenport West High School till 2004.

After a short period of a relationship, Black married Zelina Vega on a private occasion on 23rd November 2018. Vega’s actual name is Thea Megan Trinidad, and she mainly performs in the SmackDown segment of WWE with her ring name ‘Zelina Vega.’ Vega is actually from the USA and was born in the Queens area of New York. However, the couple now lives in Tampa, Florida.

According to the recent financial reports, the current net worth of Aleister Black is estimated to be around $1 million as of 2020. He currently draws around $100k salary for his associating with WWE. Besides him, Black’s wife Zelina Vega is also a professional wrestling diva and currently performs in WWE. Besides the annual salary, Black also earns from his frequent public appearances throughout the United States.

Besides winning several single and tag-time titles in independent promotions like ICW (Insane Championship Wrestling) and wXw (Westside Xtreme Wrestling), Black also achieved several awards in WWE. Some of the most notable among those are as follows:

Q. Who is Aleister Black?

Aleister Black is a Dutch professional wrestler who currently performs in WWE (World Wrestling Entertainment). He previously appeared in the development territory of WWE, NXT. Besides, he also appeared in several independent wrestling promotions such as wXw, ICW, and PWG.

Q. Where is Aleister Black from?

Q. Who is Aleister Black married to?

Aleister Black is married to Zelina Vega. Her actual name is Thea Megan Trinidad and she performs in WWE with her ring name Zelina Vega. She is actually from the Queens area of New York, United States. However, the couple now lives in Tampa, Florida.

Q. How tall is Aleister Black?

Aleister Black is 6 feet (1.83 meters) tall. With his 215lbs (98 kg) weight, he looks quite dominating in the ring of WWE. Despite his tall structure, he is quite polished in his aerial moves.